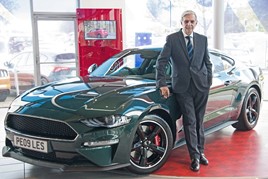 Peoples Ford chairman Brian Gilda has repeated his warning that a no deal Brexit will trigger “Armageddon” for UK industry as the group announced its latest set of annual financial results.

The Falkirk-based retailer said in a statement revealing details of its financial performance that it had been able to improve its financial position in terms of total assets by 5.6% during the reported period as a consequence of its strong trading performance.

But despite Gilda’s assertion that the group had bettered all the operational benchmarks and financial milestones identified by the directors to our shareholders, bankers and trading partners it had battled against “fierce competition and diminishing volumes in certain sections of the market” and warned of further uncertain time ahead.

And Gilda, who is also chair of the influential Ford Europe Product Panel, repeated the warning issued in the group’s previous financial results statement that the motor industry in the UK faces “Armageddon” in the event of a no-deal Brexit.

“Only the most resilient will get through the pain barrier that’s coming over the next couple of years if we exit Europe without a deal and the government will be responsible for the Armageddon that follows,” he said.

“The current disarray and hysterical rhetoric afflicting politics is bad for business and bad for industry in many respects, not least because it is undermining public confidence.

“Whatever happens in the next few weeks, whichever group is in government must get a fix on Brexit and an agreement which doesn’t impose unacceptable tariffs and cross-border trading constraints. Otherwise, there’s going to be a real shakedown in the industry.

“Manufacturers have been clear in their warnings about the effects of the introduction of tariffs.

“That is what is getting them super-heated and it’s why they’re pulling out of the UK as it puts their manufacturing base at risk.

“If there’s a hard Brexit it will have an effect on employment levels because if the market takes a tumble, all businesses will be looking at their cost structures.

“In the event of a hard Brexit, the government must consider the enormous employment levels in the industry and introduce safeguards to negate the impact of tariffs.”

Last week the Financial Times reported that Nissan had said a no-deal Brexit could prompt it to stop making the Qashqai SUV at the site – which could ultimately lead to the closure of the plant.

In September Society of Motor Manufacturers and Traders (SMMT) chief executive, Mike Hawes, joined with its automotive manufacturing body counterparts from across Europe, meanwhile, to appeal to the UK Government to avoid a ‘no deal’ Brexit at all costs.

It followed the comments of various car manufacturer bosses who voiced their fears about the split at last month’s Frankfurt Motor Show.

He said: “The combination of government actions north and south of the border along with no hard evidence implications of Brexit has led to a slowing of consumer confidence with the collateral damage on results.

“I recognised early on in our previous financial years that the private sector would be the first to show signs of stress and, as a consequence, concentrated our efforts in the commercial vehicle market to ensure we maintained volume and share.

Nicola Gilda, Peoples Ford’s group strategy and operations director, said: “Our plan is to continue the evolution of our overall route to market and perfect that ‘always there’ approach for our customers which is seamless without becoming faceless and provides the customer with a fully integrated best in class customer experience tailored to however our customers want to talk to us.

“What has become a crusade for me personally is to bring more diversity into what is still a male dominated traditional retail environment.

“At Peoples Ford, we want to reflect all of our customers and while we will continue to focus our efforts on evolving and diversifying our business model, we will also continue to evolve how we recruit, coach, lead and develop our people.”