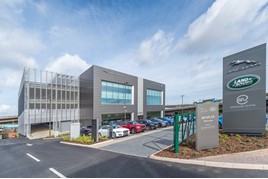 The new 86,000 square foot facility is located on the Staples Corner Business Park, on London’s North Circular Road and is one of the largest JLR centres in Europe.

In a statement issued this week Group 1 said that the dealerships, which subscribes to JLR’s Dual Arch corporate identity, is expected to deliver first-year sales targets of 700 new and 1,200 used cars.

John Tomlinson, head of business at the new Group 1 facility, said: “We are delighted to open this statement site in North West London, which is ideally located to showcase Jaguar Land Rover vehicles.

“We have worked hard to recruit a 60-strong team from a number of sectors and plan to grow our headcount to over 100 staff in the next 12 months.

“Our training has focused on delivering the highest possible standards of customer satisfaction for the area’s growing number of Jaguar Land Rover owners.

“We are delighted to finally open our doors and welcome customers into what will become a go to destination for Beadles and Jaguar Land Rover.”

The Jaguar and Land Rover showrooms are situated over three levels accessed by escalators from the ground floor.

Outside, the facility has space to display a 60 approved used cars and demonstrator vehicles.

Last month Group 1 Automotive claimed to have become the first car retailer to adopt Audi’s latest corporate identity with the opening of its new 17-car showroom in Chelmsford.

The group marked a global debut for the German premium car brand’s new-look dealership concept at the 31,000 square foot facility.

Back in August Group 1 – ranked 9th in the AM100 2019 rankings with a turnover of £2.03 billion – also expanded with the acquisition of five Volkswagen car and van franchises - in Chelmsford, Colchester, Romford and Southend – from Inchcape.