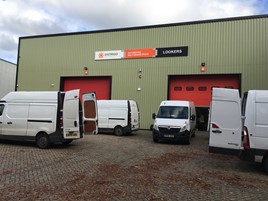 Lookers has created 32 new jobs through the creation of a new £3 million Vauxhall wholesale parts centre in Aston, Birmingham.

The new centre has been created within an an existing unit at Holford Industrial Estate and, following the installation of a mezzanine floor, provides 35,000 square feet of storage for 27,000 part lines along with space for an accounts department, call centre, offices and could eventually accommodate 50 new members of staff.

Steve Randle, parts manager at the site, said: “We are very excited to have opened this facility, which is already proving popular among the area’s motor trade community and far beyond.

“No one currently has the same offering that we have, with a huge range of parts for use in most models. I look forward to growing our distribution further over the coming years”.

Sales manager, Simon Watts, said: “As well as providing a fantastic resource for the local economy, we are also pleased to be creating new jobs in the Birmingham area.”

Lookers said that the opening of its new parts centre represents a shift in focus in its relationship with the Vauxhall brand following the closure of its dealership in Yardley last year.

The new site has been able to welcome back some of the employees that Lookers Vauxhall lost as a result of the Yardley closure.

Watts said: “It’s also great to see some familiar faces from Vauxhall Yardley who have brought us their wealth of experience and product knowledge.”

Lookers said that it feels Birmingham is perfectly placed to benefit from Vauxhall owner PSA’s new ‘hub-and-spoke’ distribution model due to its central location.

A statement issued by the group this week said: “As well as benefitting the motor trade across the West-Midlands region, the team at the new site now believe that its success could lead to more parts and distribution centres being set up in the North by PSA.”

Earlier this month Lookers announced the departure of its chief executive Andy Bruce and chief operating officer Nigel McMinn at the end of this year.

The news came as the AM100 second-placed retail group announced a profit warning and its plan to drive a process of "portfolio consolidation" to improve the future financial performance of the UK's second largest car dealer group.

Lookers will close 15 dealerships and, where possible, relocate or consolidate those businesses into existing group dealerships in adjacent territories, it said.