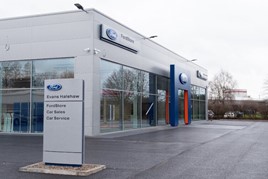 The former AM100-topping retail group revealed details of the new facility, on Sovereign Way, Chester, as it opened to the public following a 12-month construction period this week.

Martin Marsh, dealer principal at the Evans Halshaw Ford Chester site, said: "We are delighted to open the doors to our new FordStore and showcase the full Ford range to our customers across Cheshire.

“The project has been a significant investment for our business and will help to ensure we continue to provide the best possible experience to our customers both now and as we continue to grow in the future."

The new Ford dealership’s opening comes in the same week that the group claimed that its performance “improved significantly” during the second half of 2019 – a period which saw it complete the closure of 22 of its nationwide Car Store used car dealership sites.

However, in its trading update for the financial year ended December 31, 2019, it conceded that its underlying profit before tax for 2019 was expected to be “around the bottom end of current expectations”.

The group recently announced that it would close several of its Evans Halshaw Vauxhall dealership locations as part of the PSA Group-owned brand’s plan to shrink its UK retail network.

However, there have been recent announcements related to network developments within the business, with a new Porsche Centre in Stockport, a planned new Porsche facility near Nottingham among the forthcoming new openings.