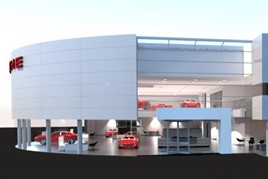 Pendragon has begun a recruitment drive to staff a new Porsche Centre in Stockport ahead of its May opening.

The dealership will occupy a 34,500 square foot site off Marsland Street and is set to employ a total of 28 people at what is a new retail point for the German premium carmaker, which is embarking on an expansion of its UK dealer network as it prepares for the arrival of new electric vehicles (EV).

Deliveries of the zero-emission Taycan supercar were set to get underway this month. Prices start at £83,367 for the Taycan 4S.

This week the Eastern Daily Press reported that work was now also underway to create another new Porsche Centre, in Norwich, which will be operated by Graham Dacre’s Lind Group.

Bulldozers have now begun groundworks for the 27,200sq-ft facility which will create 25 jobs.

Commenting on recruitment for Pendragon’s new site in Stockport, Sian Hall, Pendragon’s head of resourcing and talent, said: “We are excited to be expanding our network of Porsche Centres and bringing investment to Stockport.

“With the centre set to open in May, we’re looking for enthusiastic new team members to fill a number of roles at the site.”

Pendragon’s Stratstone division already operates a Porsche Centre in five locations across the UK - Bolton, Nottingham, Sutton Coldfield, Wolverhampton and Wilmslow - and will take on the new facility, which features a main showroom of 26,500 square foot and repair bays in a separate 8,000 square foot building.

Leeds-based APP Construction has won another multi-million pound contract to build car dealership facilities, which has become a specialty for the contractor, and the 36-week construction project has already been underway for some months.

This is APP Construction's third contract for the Pendragon automotive group, following the recent completion of a Stratstone Jaguar Land Rover (JLR) dealership in North Tyneside and another JLR scheme in Cardiff.