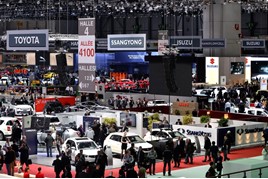 Organisers of the Geneva Motor Show 2020 have confirmed that the annual automotive expo event will go ahead despite the outbreak of coronavirus in key car manufacturing nations across the globe.

After the first case of coronavirus was reported in Switzerland on Tuesday (February 25), the board of the Geneva International Motor Show Foundation (GIMS) and Palexpo met to re-evaluate the current situation given the latest information from the cantonal health authorities and concluded that the event need not be cancelled.

In a statement issued via the event's official website, organisers said: "Based on the current situation, we have been advised that GIMS can open as planned.

"Journalists will have access to the halls from 2pm on Monday 2 March and the Car of the Year Award ceremony will take place in the Congress Centre from 3pm on the same day.

GIMS and Palexpo said that they were following the guidelines of the Federal Office of Public Health (FOPH) in making their decision, adding that they remain in regular contact with the General Directorate of Health of the Republic and Canton of Geneva and its medical advisor, and have "developed an action plan that can be adapted, as necessary, in real-time".

"The organizers will continue to monitor and reassess the situation regularly", it added.