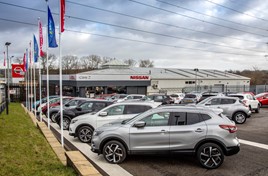 Cars2 has opened the doors of its first Nissan franchised dealership after completing the turnaround of a former Land Rover showroom in just six weeks.

The Wakefield-based car retail group – the subject of a face-to-face interview feature with AM late last year – has officially opened the doors at the new business, on Leeds Road, Bradley, Huddersfield, just weeks after taking possession of the former Rybrook site.

Cars2 operations director, Neil Crossley, said: “We’ve worked incredibly hard to get the site ready for customers as soon as possible, faster than anyone thought we could.

“We were told it couldn’t be done faster than eight weeks, but our team were able to reduce that to just six weeks.”

Cars2 has created 10 new jobs across all dealership disciplines with the addition of its first dealership with the Japanese carmaker and Crossley said that it had received its highest ever number of job applications since announcing the new business.

He added: “Already we’ve had a fantastic reception from existing Nissan owners and new customers in the area, as well as welcoming some brilliant new staff on board.

“Those who come in store can currently take advantage of some great opening offers, too.

“It’s really exciting for us to have the full range of Nissan cars available to customers. We also benefit greatly from the association with a brand that has such a well-developed electric vehicle (EV) strategy too.”

Cars2 managing director, Allan Otley, was negotiating new sites acquisitions when AM visited the group’s Wakefield headquarters last year as he continued to pursue his aspiration for the group to become a £250m turnover business while maintaining its return-on-sales (RoS) figure of more than 3%.

The group added a new MG Motor UK dealership in Wakefield last year, Crossley suggesteing that a five-figure investment to bring the brand to the city was a good investment, as Otley clearly looks to grow the business with maintaining profitability and minimising capital expenditure.

Commenting on the corporate identity of OEMs which has created such difficulties for car retailers in recent years, Otley said: “Car retailers spending £14m on a site… What are they on?

“We are convinced we can be more savvy than that and partner with the right manufacturers – manufacturers that we can do a job for, but will also work with us to help us maintain our profitability.”