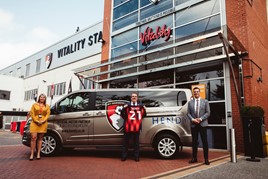 Hendy Group has confirmed it will continue to support AFC Bournemouth football club  for the next two seasons, as its official motor partner.

As part of the deal, the Hampshire-based AM100 dealer group will provide the club’s media team with transport to all away, league and cup games for the 2020/21 season.

It will also sponsor digital content, such as Moment of the Match and Hendy Cam, which will involve a drive-a-long with an AFC Bournemouth player using the company’s vehicles.

There will be a number of social media campaigns and competitions running throughout the season in partnership with Hendy.

Mark Busby, commercial director of Hendy Group, said: “We are delighted to renew our position as the club’s official motor partner for the next two seasons.

“AFC Bournemouth’s values are very much in line with our own and we are thrilled to be able to partner such a community-focused club.

“Providing transport means that their media team will be able to continue delivering quality coverage throughout the season in style, and we look forward to sharing great content and competitions with Cherries fans over the coming months.”

Hendy Group represents 23 manufacturers at dealerships located across the south coast, including a number in and around Bournemouth.

The group plans to provide season ticket holders with access to an exclusive offer from Hendy Group, details of which will be announced soon.

“We’re really grateful for its continued support during such challenging times and look forward to growing our relationship with its business.”

AFC Business will look to invite delegates of its business club for a networking breakfast event at a Hendy Group showroom as and when it is safe to do so.