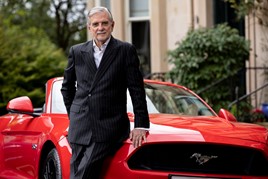 Peoples Ford chairman Brian Gilda has said that he is “delighted” with the outcome of a 2019/2020 annual results period which took the full impact of COVID-19 lockdown.

In a set of results for the 12 months to July 31, 2020, the UK’s largest independent dealership in the UK and Europe retailing only Ford cars and commercial vehicles achieved turnover of £242.3m and profits before tax and Preference Share Dividends of £3.01m.

And Gilda was extremely pleased with the outcome. He said: “You can be assured I am delighted with these results notwithstanding the 12.6% diminution in turnover and 33.8% diminution in profits from last year’s results.”

Peoples reported unit sales down 16.2% overall, reflecting the effect of a COVID-19 lockdown period which saw the company’s six dealerships closed between March and June and the furloughing of most of its near 400 employees.

The dealerships reopened in May, initially with their workshops, followed by the sales departments, Peoples said in a statement.

Gilda said: “My delight is as a consequence of coming through the lockdown with a plan which re-opened our dealerships both in Scotland and England under government guidelines which protects our customers and keeps our staff both safe and motivated to deliver the best possible results for themselves and the company.

“Therefore, the real story is to be found in the determination of my directors, management and staff to once more deliver up these results in the face of the pandemic, fierce competition and diminishing volumes in certain sections of the market. That, coupled with the outstanding loyalty of our customers, is what makes these results special.

“It does not, however, mean that we can declare all is well with the world and we can allow ourselves the luxury of taking our foot off the gas. For me and my team this is just not possible in the arena in which we operate.”

Gilda, who chairs the influential Ford of Europe Product Panel, said there had been “encouraging activity levels due to pent-up demand” since re-opening.

But with Brexit imminent, Gilda, who warned of "Brexit Armageddon" when posting 2018/19's annual results, said: “Without a deal, the industry would be facing the dark side of the moon by having to adhere to World Trade Organisation rules imposing tariffs which could add 10% to the cost of a vehicle. A deal has to be reached because it is vital for the health of our industry which employs thousands of people in manufacturing, sales and support.”

Gilda also said that in his anticipated spending review Chancellor Rishi Sunak must clarify his strategic priority because, at present, “no one in government seems to know what it is”.

He said: Is it reviving the economy, saving lives or protecting the environment?”

In his chairman’s statement, Brian warned that Brexit had already damaged consumer confidence: “The combination of government actions north and south of the border, along with no hard evidence implications of Brexit, has undoubtedly led to a denting of consumer confidence which has also had collateral damage on results.”

Peoples Ford group employs 385 staff at three dealerships in Scotland in Edinburgh, Livingston and Falkirk and three in and around Liverpool at Orrell Lane, Bootle; Bridge Road, Prescot; and Speke Hall Road.

Despite the lockdown, only three posts were lost through redundancy.

Gilda said: “In all the chaos and tragedy, our priority was to look after our staff and the Job Retention Scheme was effective in helping us achieve that.”