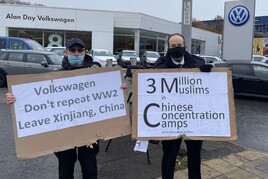 Volkswagen, whose UK base is at Milton Keynes, has denied the claims and states it opposes all forced labour.

But the protestors had been displaying their placards on the pavement in front of the VW franchised dealership, run by privately owned motor retailer Tanner Automotive, since late last year until they were moved on by police this month, using coronavirus legislation, Yahoo News reports.

Regarding the protest, Volkswagen has said in a statement: “We have no evidence that forced labour is being used in our direct supply chain or at any of our production plants.

“At our plant in Urumqi, all employees have a direct labour contract with SAIC Volkswagen with equal pay for equal jobs. No organisation outside of SAIC Volkswagen has any role or influence in hiring decisions.”

The protests arose in response to reports by the BBC last November of allegations of human trafficking and forced labour camps in the Xinjiang region of China.

Over the years protesters, aiming their messages at carmakers and consumers, have occasionally targeted dealerships - independently owned businesses - as the local face of the car brand.

In 2020 Marshall Jaguar Land Rover in Cambridge was daubed by Extinction Rebellion protesters, and in 2005 seven Land Rover dealerships were targeted by Greenpeace members blaming its 'gas-guzzlers' for causing climate change.