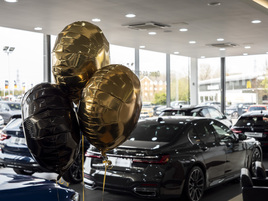 Rybrook Group’s owners, the Whale family, are celebrating 50 years of working with BMW as a franchise partner.

To celebrate its ‘Golden Anniversary’ with BMW, the group’s retailers will be holding a series of events to raise money and support local communities in the centres surrounding area, as well as customer events recognising loyalty to the Rybrook BMW Centres.

From today, April 21, the Rybrook BMW Shrewsbury, Warwick, Wolverhampton and Worcester Centres will launch an April Golden Ticket Event offering all sales and service customers in the centres the chance to enter a weekly free prize draw for the opportunity to win a range of prizes, with all participants entered in to a final prize draw at the end of the month to win a two night weekend break.

“An entrepreneurial, forward-looking culture has always been part of our DNA”, said Peter Whale, Rybrook Group chairman. “In the 1970s, we started looking for new franchise partners to work with and BMW was a brand that was technologically advanced and developing new products and designs at a rapid pace – just as UK lifestyles were also dramatically changing.

“Our businesses have always been focussed on carefully listening to our customers and anticipating their needs, which will continue to be a key to our success in the future, so it’s imperative that we work closely with our franchise partners and we have done that successfully with BMW for 50 years.”

Today, it’s Peter’s son Henry Whale who, in his position as CEO of Rybrook, leads the company.

Graeme Grieve, CEO of BMW Group UK said: “The BMW Group has enjoyed a long association with Rybrook and the Whale family and to reach this 50 year anniversary in our industry is truly something to be celebrated.

“They have always approached the business with creativity and ingenuity, with customer service at the centre of everything they do, and that has driven their success. On behalf of everybody at BMW Group we send our warmest congratulations.”

All four of Rybrook Group’s BMW sites have undergone full refurbishment in the past few years and construction has started on a brand-new purpose-built facility for Rybrook BMW Warwick.