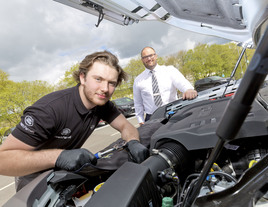 Launching the recruitment drive today (May 10), the AM100 car retail group’s divisional aftersales director, Matthew Timmons, described the opportunities on offer as “is an amazing prospect for a significant number of young people”.

Potential technicians, service advisors and parts advisors are among the roles being recruited for at the Farnell JLR sites, with training set to be delivered to successful candidates on-the-job and via classroom-based training centred on five regionalised state-of-the-art JLR Training Academies.

Vertu said that the new apprentices would also enrolled onto JLR’s Learner Management System to guide them through their short-, medium- and long-term career paths.

Timmons said: “The Jaguar Land Rover training academy is second to none and the opportunity to learn from Farnell’s experienced professionals will ensure the best possible start to a career path that offers many opportunities.

“We have already identified four exceptional candidates who have joined the team and very much look forward to filling these coveted roles.”

Adam Johnston is an 18-year-old apprentice already working with Vertu at Farnell Nelson.

Describing his apprenticeship experience, he said: “I have always been interested in vehicle mechanics and Land Rover as a brand, so I seized the opportunity when it came up.

“Farnell Nelson is a great place to work. Everyone is super helpful and have helped me settle in and answered all my questions.

“My manager is always on hand to support me and finds time for me every day. I’ve definitely made the right decision.”

The National Franchised Dealers Association (NFDA) welcomed a “Skills Speech” by Prime Minister Boris Johnson back in September, expressing hope that it may indicate a move towards jobs generating apprenticeships reforms.

In a speech delivered at Exeter College yesterday (September 29) the Prime Minister said that Government intended to expand apprenticeships, reforming the system so that unspent Apprenticeship Levy funds can be used more easily.

NFDA chief executive, Sue Robinson, indicated that easy access to Apprenticeship Levy funds remained central to the ongoing success of apprenticeships to meet the sector’s skills gap, adding that reform was needed to increase its usage in the current climate.

She said: “Attracting young people to our industry and providing them with the opportunity to gain technical skills has been a key focus for NFDA and something we have been highlighting over the past years through the continued success of Drive My Career.”

The PM's speech came a months after the Institute of the Motor Industry (IMI) highlighted that apprenticeship recruitment in the automotive sector had fallen by 75% in June last year, according to data published by the Department for Education (DoE).