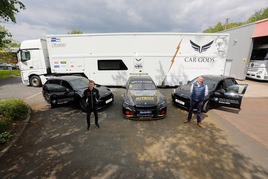 The Car Gods with Ciceley Motorsport team is entering this year’s BTCC with a BMW 3 Series driven by Tom Chilton and Adam Morgan.

Morgan, who is a member of the Morgan family that owns Ciceley, said: “Both our families go way back. It goes beyond business. My grandad Brian Morgan and Bill Bowker were great friends. Subsequent generations have grown up together. And both families make no secret of our shared passion for Lancashire and motorsport. That’s why Bowker BMW’s support for this 2021 British Touring Car Championship season means so much.”

At Brand Hatch last weekend, Morgan claimed the ninth victory of his BTCC career, leading from start-to-finish in round nine of the championship.

Bowker Motor Group director Chris Eccles added: “We’ve watched Ciceley Motorsport’s successes over the years with great interest. We love to see other Lancashire families flying the flag for the county on the national stage. Ciceley Motorsport team’s switch to BMW presented the perfect opportunity to agree a closer relationship with the team. We are excited to be involved and can’t wait to be part of the fun as this year’s British Touring Car Championship story takes shape.”