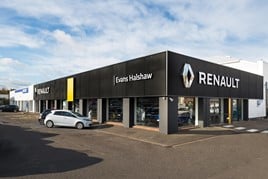 Swedish motor retailer Anders Hedin has increased his stake in the UK's top 10 AM100 group Pendragon to just over 25% of voting rights.

Privately-owned, Hedin is an acquisitive group, and has added several businesses in mainland Europe in recent years.

Anders Hedin, who earlier this year criticised the bonus payment of Pendragon chief executive Bill Berman, said: “Since Hedin Group first become a shareholder in January 2019, we have supported Pendragon in its mission to regain its position as the leading automotive retail business in the UK and we are pleased with the positive steps the company has taken this year.

"Management’s strategy and the recent appointment of an independent chairman are encouraging developments from which positive momentum can be built.

"We are supportive of the management and looks forward to work constructively with the board to continue with Pendragon’s success, to the benefit all stakeholders.”

Before Finn retired in 2019 from Pendragon, which retails under the Stratstone and Evans Halshaw brands, he had been developing a strategy for Pendragon to increase its focus on used car retailing through its Evans Halshaw Car Store supermarket chain and increase e-commerce services across the whole group.