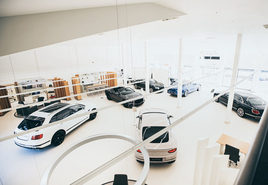 Supercar and luxury vehicle retailer HR Owen has reported a seven-fold rise in pre-tax profits in its 2020/21 annual financial results.

Profit before tax at the AM100 car retail group swelled from £1.9 million to £13.7m in the 12-month period to June 30, 2021, according to the results published via Companies House.

“The past year has been challenging. Despite this the group delivered an exceptional result,” HR Owen said.

HR Owen’s results revealed that, although it had benefited from the UK Government’s Coronavirus Job Retention Scheme (CJRS) it had cut its headcount by 39 to 409 during the 2020/21 period.

Commenting on its strategic direction and future outlook, HR Owen’s trading statement said that the group had begun to focus on new dealership developments that benefited from freehold property arrangements.

Among these investments is a new 5.4-acre multi-brand dealership site at Hatfield, following on from the creation of a new Rolls-Royce showroom in Mayfair and a Bentley dealership in Ripley, Surrey.

The group has also expressed a desire to further leverage its profitability from aftersales and pre-owned vehicle sales.

The group’s results statement added: “We continue to hold a strong order book of new cars and expect to benefit from additional new models due for delivery in the remainder of 2021 and early 2022.

“The foundations for the group’s success in serving a highly discerning target market are now firmly in place and as the current period’s results have shown, the group is continuing to invest heavily in capital expenditure which will lay the foundation for further growth.”