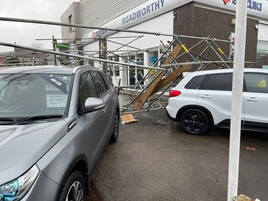 The boss of a Bristol Suzuki car dealership has been left reeling after Storm Eunice wrecked 15 new cars on its forecourt.

Friday's severe winds caused a three-storey scaffold at Roadworthy Suzuki to come crashing down onto cars below, causing an estimated £150,000 to £200,000 of damage.

Managing director Steve Hoare said the setback was "devastating" and he's been on to his insurers to sort things out.

"It's devastating. We were just getting back to normal after COVID and getting the business back on track, and now this.

"It's going to be hard to replace those cars."

Suzuki, like most car brands, has suffered new car supply issues caused by the global shortage of semiconductors, although its UK boss Dale Wyatt has tried ingenious workarounds, such as importing cars without factory-fit infotainment systems so that locally-sourced units could be added to speed up supply. 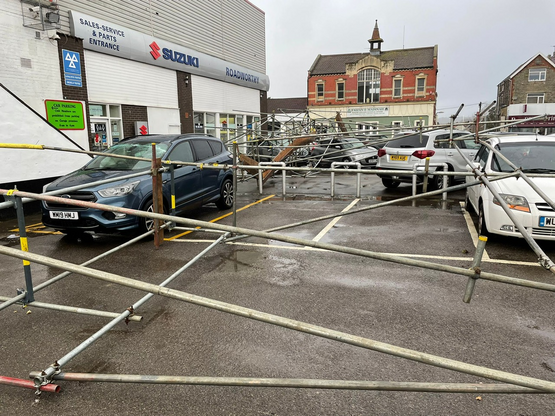 Roadworthy Suzuki's boss counted his blessings, however, that no-one had been nearby when the scaffold collapsed.

"A customer had come through the doors just 10 seconds before," Hoare said.

"It was a blessing that no-one has been hurt at all."

Hoare's business is one of Suzuki's strongest performers and is well known for looking after car buyers - in 2021 it received Suzuki GB's Outstanding Performance in Customer Service Award.