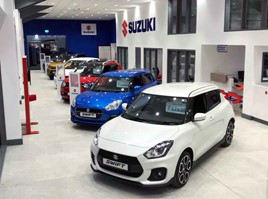 Scottish dealer Pearson of Wemyss Bay was crowned National Dealer of the Year and Roadworthy Suzuki Bristol was given the trophy for Outstanding Performance in Customer Service during the event, which was held online due to COVID-19 restrictions.

All dealerships within Suzuki’s nationwide network were evaluated using the same criteria to determine the regional, national and customer service winners.

Each site was assessed on the percentage of target sales achieved, the finance penetration percentage, the Sales Customer Satisfaction Index (CSI), the Service CSI, Customer Retention, the number of parts sold as well as quantity of accessories sold.

The figures were then aggregated on a balanced scorecard to reveal the top dealer in each of the categories.

Dale Wyatt, director of Automobile at Suzuki GB, said: “It is an honour to recognise the   achievements of our network over the last twelve months which are made even more important due to market conditions and the heavy restrictions we are currently experiencing.

“We would like to congratulate all our award winners, they have shown exemplary standards of work and customer service, and without them, we would not be in the strong position that we find ourselves in today as we begin the new year. Congratulations, and we look forward to enjoying further success and a more formal celebration together later in 2021.”

Retailers in the Japanese brand's network were handed a swift package of COVID-19 lockdown support - described by Wyatt as being “a bit Heath Robinson” at the time - when lockdown began back in March last year.

In November, it followed that up with a bonus of up to £10,000 to its franchised car dealers as a reward for their efforts to adapt to trading during the COVID-19 pandemic.

Speaking to AM following the launch of the initiative, Wyatt said: “Our retailers have worked extremely hard to evolve to the situation and we want to protect them from the impact of more lockdown restrictions as well as we can."