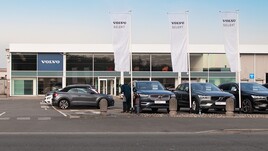 Mon Motors managing director Gavin Cleverley has told AM that he is “excited” to welcome the Volvo Car UK franchise into his business with the opening of a new dealership in Cardiff.

The AM100’s 54th ranked car retail group by turnover has officially moved into a temporary showroom at the former Jenkins Mitsubishi and Suzuki site on the Cardiff Trade Park, but is awaiting planning permissions for a purpose-built Volvo Retail Experience (VRE) facility on Cardiff Gate Business Park.

Cleverley said that it was great to open the doors to customers after long-running discussions with the Swedish premium brand.

“We’ve been working to wards this for eight to 10 months, so it’s great to see things moving in the right direction,” Cleverley told AM.

“Planning on the new site has been delayed, but we’re hoping to get that over the line in the next week or so, and that new two-acre site and seven-car showroom will represent a significant addition to both ourselves and the Volvo network.”

Cleverley added: “It’s great to add such a strong brand right in our own back yard. I’m really excited about it.”

Mon Motors takes over the Volvo franchise in Cardiff from Abbey Garages, which also hold the Ford franchise for the city.

Cleverly said that staff had been carried over from the former Volvo dealership on Penarth Road.

AM understands that new Cardiff Volvo head of business Gabe Materson is among those that have moved over from Mon Motors, having made the move from head of sales at Cardiff Audi.

Mon Motors also represents the Audi, Ford, Seat, Skoda and Volkswagen brands in South Wales and also has sites in Bath and Bristol.

The group is excited by the prospect of adding Volvo, with its latest electric vehicle (EV) range additions including the XC40 Recharge and C40 Recharge models.

And the group has had to adapt to new processes to prepare the arrival of Volvo, which aims to shift 100% of its new cars sales online as part of its omnichannel retail strategy.

Back in February AM reported that the brand had launched a new used car sales platform that will sell its “newest” vehicle stock direct to online car buyers.

“There has been a lot to get our heads around, but we’ve been planning for this for many months and we’re just really keen to get things up and running,” said Cleverly.

Asked whether the addition of Volvo might mark the start of a growth push for the group, he added: “We would still like to grow with the right brads in the right market, but we are a family-run business and we like to be hands-on.

“We’re not on an acquisition drive.”