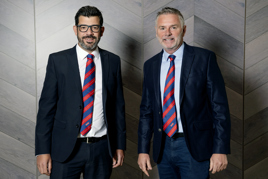 Drive Motor Retail has vowed to match-fund the charitable efforts of its workforce in a bid to raise £50,000 for victims of the war in Ukraine.

The AM100 car retail group is encouraging staff across its 16-site dealership operation to show their support for the Ukraine Disaster Emergency Committee and will present a special award at its annual Overdrive Awards ceremony to recognise the most successful fund-raiser.

Joint group managing director Stuart Harrison said: “As a business we understand the importance of charitable activities and have all been particularly keen to support those affected by the conflict in Ukraine.

“We have thought long and hard about ways we can show our support and have carefully planned a fundraising campaign to help those who need it most.

“We are encouraging everybody at Drive to get involved, both through individual fundraising activities and team events”.

Fellow joint MD Rob Keenan said: “Members of our own team have family and friends directly impacted by the conflict, and we want to do everything we can to help.

“If everyone pulls together to complete a joint challenge, or supports a few teammates in achieving something extraordinary, we know this target can be reached over the coming months. I am looking forward to seeing the ideas each site comes up with.”

Car retailers across the UK have rallied to help vistims of Russia’s invasion of Ukraine.

Peter Vardy Group was one of the first AM100 businesses to pledge its support and succeeded in raising more than £200,000 for the people of Ukraine by the end of March.

A mercy mission coordinated by former body shop boss Steve Taylor, Autoclenz executive Steve Jones and former dealer group director Lisa Ford in the UK ensured that essentials from sleeping bags to food and medicines reached the eastern Polish town of Zamosc, which had been inundated with people seeking safety from Russia's attacks on Ukraine.

Menwhile Hatfields succeeded in raising £60,000 for victims of Russia’s invasion through the auction of a classic Series 2a Land Rover Defender.