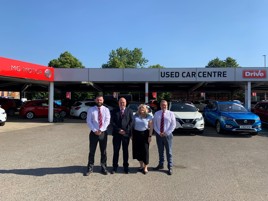 Bustin, who brings 32 years’ experience in the motor trade to the role, said: “My first impressions of Drive are great. We have a leadership team which is very focused on growing the business and the team I have around me are a success story in the making.”

The AM100 car retail group Drive delivered a turnover of £226.3 million in its last published accounts, for a COVID-impacted 2020 trading period, alongside pre-tax profits of £3.36m.

It currently employs over 700 members of staff in 16 dealerships.

The decision to expand the groups MG retail operation in Leicester came as the brand continued to accelerate its growth in the UK, with registration volumes up 83.04% to 19,695 to the end of May.

AM recently reported that MG had paused sales of its affordable electric vehicle (EV) models as it struggled to me demand, however.

Katie Levy has also been promoted to MG sales manager.

Rob Keenan, Drive Motor Retail joint managing director, said: “It is great to see the team at Leicester growing and with Paul’s experience, the site is in a great place to expand further after the work we have done in the past year.

“At Drive we pride ourselves on our happy, longstanding employees so we welcome all the new members of the team and look forward to them becoming part of Drive for a long time to come.”