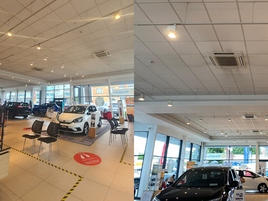 Data from REALtime Communications Insights show that indirect dealer expenses rose by 20% year-on-year in Q1 and, as energy prices soar, retailers need to get a tighter grip on costs.

John Law, director of REALtime Communications Insights, said: “While trade headlines continue to report on some impressive profit figures delivered over the last year, our benchmark data illustrates clearly that negative headwinds are building. The impact of spiralling inflation is being felt by consumers and dealers alike.”

The widely publicised gas price cap does not apply to businesses and, as a result, energy suppliers are now passing on their costs to companies by increasing their business gas and business electricity costs.

Journey Energy Solutions said many dealers are likely to be unprepared for a sharp rise in operational costs and will need to find ways to reduce their electricity bills and meet corporate net zero emissions ambitions.

Taking swift action on energy efficiency investments is the best way to mitigate the hit of inevitable price rises, the company said.

The most recent Office for National Statistics (ONS) data on 12-month inflation rates saw rises of 95.5% for gas and 53.5% for electricity.

Law added: “There is no magic formula to address the challenges. Dealers need to understand where they are to optimise performance and reduce costs. Benchmarking performance in stocking, used car pricing, aftersales activities and the promotion of added value retention services such as service plans, extended warranties and older car servicing are just some items that should be up for debate.

“In a market where marginal gains will  be critical; benchmarking will be essential to isolate the areas for the action that for many will be needed now.”

Used cars were also identified by the ONS as a notable contributor to inflation, rising 23.4%, according to their most recent data. However, this was a fall from a peak of 31% in March, a downward shift reflecting the fall in consumer confidence to a lowest-ever score in May and widely reported quieter sales activity since April.

More than a third of in-market car buyers have decided to delay their purchase due to rising living costs, according to new data from What Car?. It found a similar number of buyers have also reduced their budget for a replacement car, while 20% have switched from looking for a new car to a used model.