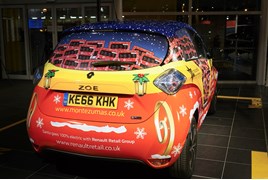 Renault Retail Group has replaced Santa’s sleigh and reindeer with a Zoe EV for a festive test drive aiming to cut emissions during his globe-trotting annual present delivery operation.

The man in red will tour areas of London, Cardiff, Cannock and Manchester from December 4 to December 7 on his EV test drive in a bid to calculate how far he can get and how many gifts he can deliver on one charge.

Renault Retail Group’s Santa be hand-delivering 1,000 boxes of Montezuma’s Christmas chocolate to anyone who tweets #SantaGoesElectric to @RenaultRetailUK during his tour as part of the marketing exercise.

Number-crunching marketing experts at the Renault UK-owned AM100 retail group calculated that Santa’s nine reindeer emit 40,600 tonnes of greenhouse gas during their worldwide Christmas Eve trip due mainly to their methane output.

Furthermore, nine hard working reindeer will need to consume about 7,328 calories per mile – 179 carrots per mile (or MPC) at 6p per carrot – costing £10.72 per mile, compared to the Zoe’s claimed potential of 2p-per-mile of electricity consumption.

The Renault EV will also be able to dodge London’s emissions regulations and ensure he can still deliver gifts to urban-dwelling children.