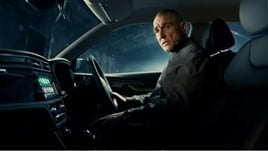 Mitsubishi has launched an advertising campaign aligned to Channel Four’s SAS: Who Dares Wins and SsangYong have turned to Vinnie Jones as brands adopt ‘no-nonsense’ marketing campaigns in 2020.

Mitsubishi Motors in the UK has begun its sponsorship of an official spin-off podcast of SAS: Who Dares Wins” in an effort to gain exposure to some of the hit TV series’ two million viewers.

Ssangyong Motor UK, meanwhile, has recruited the former member of Wimbledon’s ‘Crazy Gang’ and star of Lock Stock and Two Smoking Barrels to promote the new Korando SUV in a series of 30-second television advertising slots to be screened on ITV, Channel4 and Sky until March, with supporting campaign assets online.

Steve Gray, marketing and communications director at SsangYong, said: “As a challenger brand we need to produce messaging and content that has proper cut through with our audience.

“We were looking for a creative campaign that talks to the consumer in a credible, honest and authentic way.

“Our brand is not fashion driven, corporate or flashy – it’s grounded and different, hence the straight-talking approach. We are delighted with our biggest campaign yet.”

Set in an industrial warehouse environment, Ssangyong’s tongue-in-cheek television adverts see hardman Jones talk his way around the new Korando, pointing out the fundamentals whilst wearing his favourite fluffy slippers.

In his straight-to-the-point tour of the new vehicle, Jones concludes that the car is “big, fancy and has a weird name… But for £19,995, who’s bothered?”.

Mitsubishi’s plan to piggyback the success of the SAS survival show’s fifth series sees it support a podcast for the first time.

Kate Dulake, marketing general manager at Mitsubishi Motors in the UK, said: “We are delighted to partner with Channel 4 in such a great programme.

“Ambition lies at the heart of SAS: Who Dares Wins which fits brilliantly with our brand strategy.

“We’re also excited to explore podcasts for the first time as a way to get really close to our audiences in a way that’s completely on their terms.“

The latest series of SAS: Who Dares Wins sees 25 men and women (including an ex-SAS operator working as a mole) put through a series of arduous physical and mental tests to see if they have what it takes to be an SAS recruit.

The reaction podcast is hosted by award-winning broadcaster Andrea McLean, herself an ex-SAS celebrity recruit on the gruelling reality show.

Each week the show will feature special celebrity guests, including Ed Stafford, Natasia Demetriou and Jamie Jewitt, who join some of the former UK Special Forces Soldiers including Foxy and Ollie, medical consult to the show, Dr Sundeep Chohan, who talks about the mental and physical toll the recruits are going through, and 'The Mole' from the show, who gives them the inside line on what life in the camp is like, along with talking to some of the recruits.

SAS: Who Dares Wins has previous ties with the automotive sector.

Break-Point director Jason Fox - the star of Channel 4’s hit show SAS: Who Dares Wins, known as 'Foxy' - carried an Aston Barclay flag to the North Pole as part of the Borne Arctic Challenge after putting the remarketing operators staff members through their paces in 2018.