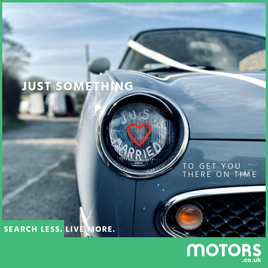 It entails the next burst of Motors.co.uk's 'search less, live more' brand campaign, and its sponsor idents in each commercial break will adopt Saturday Night Line-Up's format but with car owners facing a series of humorous questions.

Its 'search less. live more' campaign” first aired in March, and was supported in June and July by the release online of four new episodes of its “How to Car” video series starring Ellie Taylor.

“We’re excited to be the headline sponsor of Paul O’Grady’s Saturday Night Line-Up which will present the Motors.co.uk branding to millions of viewers on prime-time national television,” said Dermot Kelleher, head of marketing and research at eBay Motors Group.

“We believe the sponsorship campaign will help increase awareness, recall and consideration for Motors.co.uk."

The new ITV entertainment show asks celebrities to pit themselves against each other, to find out what the great British public really thinks of them.

The deal includes sponsorship of a Christmas special episode.

“The show’s premise reinforces our belief in finding the right car to fit your life and this clear messaging we believe will resonate with car buyers across the country,” said Kelleher.

In the summer AM learned the used car advertising platforms Gumtree and Motors.co.uk would be offered for sale after Norwegian online advertising business Adevinta completed the acquisition of eBay Classifieds Group.

Motors.co.uk, Gumtree and eBay were brought together under one brand, the eBay Motors Group, in November 2019, and at the time the new entity said that it would enable motor retailers to access their broad range of vehicle advertising services from a single point.

New owner Adevinta has agreed to sell the Motors.co.uk and Gumtree – along with its Shpock classifieds site – after the Competition and Markets Authority (CMA) expressed concerns that a deal between it and the Silicon Valley-based eBay would see Facebook emerge as its only true competitor, however.