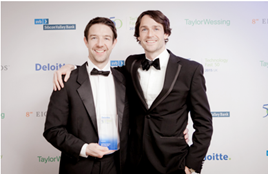 Carfinance247 has been ranked Number 13 Fastest Growing Technology Company in the UK as part of the 2015 Deloitte Technology Fast 50.

The ranking of the 50 fastest-growing technology companies in the UK are based on percentage revenue growth over the last four years and the firm recorded a 1,468% score.

Carfinance247’s co-owners, brothers Reg and Louis Rix, who founded the business in 2006, attended the awards dinner in London where they were presented with a trophy.

Reg Rix, managing director of Carfinance247, said: “It’s been a phenomenal year for the team here based in Manchester and being recognised in such a high profile, national ranking is a real privilege.

“This is the latest in a number of schemes we’ve been recognised in, testament to the hard work and dedication of the whole team.”

Carfinance 247 processes some 17,500 finance applications each month and claims that 50% of customers receive an approval within minutes and the remaining within the hour.

Despite its success Rix said that the business is still in the “stat-up” phase and expects increased growth within the on-line car finance sector.

Also founded in 2006, Zuto has seen accelerated growth recently thanks to an £8 million cash injection from Scottish Equity Partners in 2014.

“This year’s ranking highlights the importance of being innovative and finding a niche product or service, to beat the recession.”