The UK’s consumer car finance market grew 1% by volume and 8% by value during August, according to new data from the Finance and Leasing Association (FLA).

A total of 177,640 vehicles were financed by FLA members, across both the new and used car sectors in the month before the 70-plate new car registrations change-over month, with a combined value of £2.71 billion.

Despite the positive movements, new business volumes in the consumer car finance market remains 22% down year-to-date.

And Geraldine Kilkelly, head of research and chief economist at the FLA, warned that the uncertain economic outlook meant that the sector remained in need of Government support.

She said: “It is encouraging to see further growth in the consumer car finance market, which shows the underlying strength of the market despite the disruption caused by the COVID-19 crisis.

“However, the near-term outlook for demand and employment is highly uncertain as new restrictions are imposed to deal with the ongoing crisis.

“It is more vital than ever that the Government and Bank of England support all lenders, including non-banks, by removing obstacles that still exist around access to funding.

“This will ensure that the motor finance industry is able to meet the ongoing demand for forbearance and new credit.” 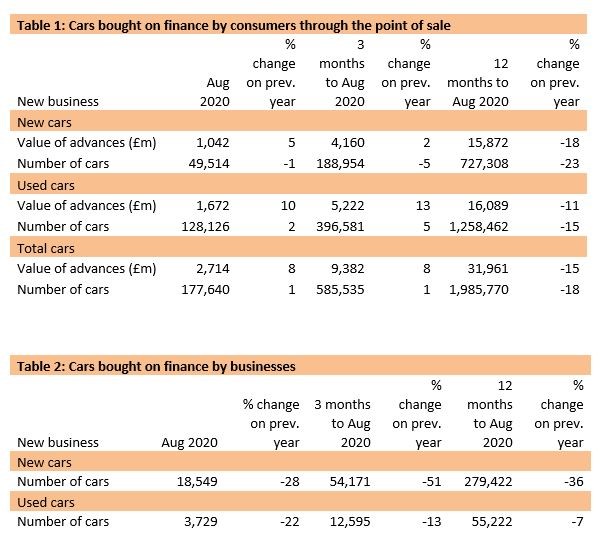 Although the volume of new car sales funded by FLA members declined by 1% to 49,514 during August – below the Society of Motor Manufacturers and Traders’ (SMMT) reported 5.8% decline in new car registrations for the month – the value of advances rose by 5% to £1.04bn.

The number of cars bought on finance by businesses continued its slump, however.

The percentage of private new car sales financed by FLA members in the twelve months to August 2020 held steady at 93.5%.

Automotive Retail Recovery Conference May 2021 - Save the date

This online, live event takes place across two mornings and tackles the critial, strategic issues challenging motor traders - and the journey we will take to ensure a successful and sustainable automotive retail industry.

Save the date - and look out for updates on the conference