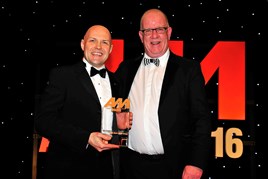 With 15 entries from dealers and manufacturers, this category was hard-fought.

However, John Clark Motor Group claimed no other group in the UK was as committed to developing its people – and the judges agreed.

In January 2015, the Scottish dealer group launched its development centre with more than 30 in-house programmes catering for every role from director to driver.

John Clark employs 1,184 people and in 2015 it ran 95 internal courses delivering 2.1 training days per staff member for more than 1,200 attending. A further 2.8 training days per person was provided via manufacturer schemes.

From the day they start, all staff can access learning resources on an intranet. For service advisers and sales executives there is a ‘first 90 days’ programme, with training tips emailed daily. All new staff go through an induction, during which they sign up to training courses and assessments. Suppliers also give them product awareness courses.

Supporting this is the ‘up for it’ succession plan, which prepares staff for a management role.

John Clark is also the first group to become an Audi-approved training centre, offering manufacturer training in its dealerships.

The AM Awards’ judges concluded: “John Clark’s approach to training and people shows it’s about creating the right culture, not just development of skills.”