Could UK car dealers escape the worst in 2018’s economy? 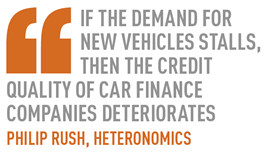 As inflation rates reached a five-year high in October, it appeared that the effects of the first rise in lending rates for a decade would have a more immediate effect on consumer confidence than car retailers’ profitability.

Industry analysts believe that many dealers had already taken steps to improve their businesses’ gearing ratios and make use of free stocking facilities as they looked to isolate themselves from the shift in the economy while continuing to fund a drive towards greater used car capacity.

Robin Luscombe, owner of Leeds-based Suzuki and Mitsubishi operation Luscombe Motors, said: “During the good times in the last few years we have been able to operate without used stocking loans, and also buy
the freehold and overpay the repayments, as I suspected rates would increase, so I was focused on reducing loans while rates were low.”

But while speculation surrounding a potential two further 0.25% rises in interest rates in 2018 could prompt greater action from retailers, vulnerable consumers are already tightening their purse strings.

In a climate where household debt levels as a proportion of national income have surged back to 137% over the past two years – households having racked up unsecured debts of £203 billion on credit cards, car finance, overdrafts and other loans – customer confidence is likely to be hard hit by any interest movement.

John Clark, chairman of John Clark Motor Group, said November’s interest rate rise would compound the wider effects of Brexit and
inflation on “the spending power of every family”.

He added: “As far as the interest costs to the dealerships are concerned, yes it will have an effect, particularly if we are carrying higher stock levels of new and pre-registered units due to a decline in new car sales. Inflation in general will be the cause of many increases in Q4 and 2018.”

ASE chairman Mike Jones told AM: “The interest rate rise would have been welcomed if it was a sign of improved retail confidence and inflation coming from consumer demand, but that’s not the case. 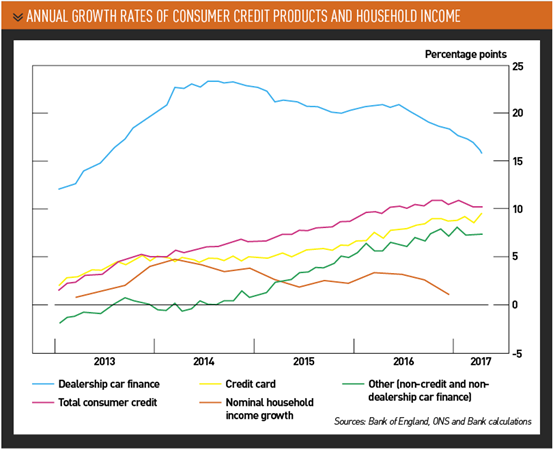 “It reflects the inflation that comes about as the result of the exchange rate movement, which means the retail climate is still extremely tough.”

A similar sense of foreboding followed the first month of Q4 on the high street, where consumer spending has been focused very much on the essentials.

Rachel Lund, the British Retail Consortium’s (BRC) head of retail insight and analytics, said consumers had turned away from spending on non-essential items, with clothing,
footwear, jewellery and household appliances all on the decline. A “particularly bad” set of October results showed the retail sector 1% down on 2016 on a like-for-like basis.

The decline represented the worst performance of non-food sales since BRC records began in January 2011.

BRC chief executive Helen Dickinson said: “The growth in food sales adds some colour to this otherwise anaemic picture, but these figures are very much buoyed by inflation.

“Real consumer spending power has been on a downward trend in the last year as the acceleration in inflation has caused shoppers to become ever more cautious in considering what purchases they can afford.

“Many now face higher borrowing costs, given the rise in interest rates, which will only serve to heap further pressure onto household finances.”

Share prices in the sector have declined 14.6% on average YTD versus the FTSE general retail index, which has declined 11.8%, he said, adding: “In our view, this underperformance versus the general retail sector is partly a result of investors becoming nervous over the perceived exposure to big-ticket item purchases.”

Lund highlighted the motor retail sector’s finance instruments, such as PCPs, as a means by which the sector should be isolated from the effects of the interest rate rise and inflation.

As Jones also acknowledged, while the 0.25% rise in interest rates introduced on November 2 represented the first rise in a decade and a doubling of the overall rate, it remained a nominal rise.

He said: “The rise in a monthly payment for a consumer PCP will be nominal and, due to the fixed rate of those already on an agreement, few will feel the effects straightaway.”

Rising interest rates, the ongoing effects of falling sales figures and the SMMT’s latest predictions, which will see new car registrations fall 4.7% to 2.565 million units this year and 5.4% to 2.426m in 2018, have fed fears for the exposure of banks and finance houses to the automotive sector still further, however.

Bloomberg reported that the changing marketplace could leave Britain’s banks nervous about their £24bn exposure to car loans as conditions pose a threat to car prices and the viability of PCPs, whose affordability is closely tied to residual values. 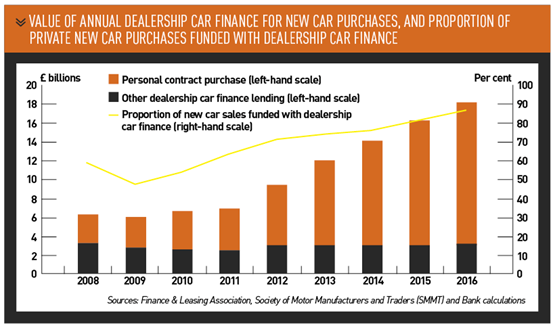 Lloyds Banking Group, Britain’s largest mortgage lender, has £11.6bn of car loans on its books, according to analysts at JP Morgan.

Its car finance arm, Black Horse, boosted its assets by 20% last year, including its joint venture with Jaguar Land Rover and Lex Autolease.

While average used car prices reached record levels for Auto Trader and BCA in October, rising inflation and interest rates could have an effect on values as 2017 draws to a close.

Philip Rush, chief economist at Heteronomics in London, told Bloomberg: “If the demand for new vehicles stalls, then the credit quality of car finance companies deteriorates – that’s the transmission channel that could lead to a wider shock for the industry.”

The Bank of England will report the results of stress tests on banks on November 28, which will include the impact of falling used car prices in 10% increments on capital and financial performance.

Rush conceded that a 10% drop was “manageable” and already factored in, but said if prices were to fall below that, “there could be the same phenomena seen in US during the subprime crisis where people gave their house keys back instead of serving the debts as prices were collapsing”.

UBS Group analysts estimated that if losses on car loans increase by 1ppt more than expected, Lloyds’ pre-tax profit in 2018 could decline by 2%.

The same measure is more than 6% for Close Brothers Group, the report found.

However, Adrian Dally, the Finance and Leasing Association’s head of motor finance, insisted: “The UK’s finance providers are well prepared for changes because they have very long memories about the context
of the environment they are operating in.

“The Bank of England completed a stress test for our market back in June, where it stress-tested an extreme and unprecedented scenario, a 30% resulting in everyone handing their cars back. We all know that has never happened before.

“We are confident that the sector is in a very resilient position.”

Dally said vehicle prices were a key influence on the residual prices behind the attractive finance offers and indicated that interest rates could have an equal or greater effect on those than inflation or interest rate rises.

Zeus’ Allen noted that, as middlemen in the automotive value chain, dealers “benefit from inflation and suffer from deflation”, mainly as a result of vehicles’ residual value weakness.

Allen said one major residual threat is oversupply, but with the weakness of the pound putting pressure on new car prices – Luscombe suggests that values have risen by an average of 10 to 15% this year – and Jato Dynamics’ reports of volume opportunities in Spain and Italy, vehicles could be diverted away from British shores.

While speculation in the mainstream media suggests that falling registrations could hit residual values and place finance providers on a perilous footing, Allen asserted: “A correction in new car sales could actually help reduce oversupply in the market and actually be healthier for residual values further down the line.”

He said the change is likely to be led by volume players, which are generally less “well hedged” than the likes of Audi, BMW and Mercedes-Benz, who still have a focus on market share.

Speculating on the ongoing economic trend, and the likelihood of further interest rate rises in the near future, Allen added: “The sharp devaluation of the pound following the UK’s vote to leave the EU has significant implications for the motor manufacture and retail sectors, which represent significant import and export markets.