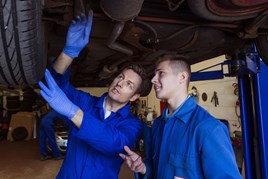 Despite dealers in the AM100 paying a total of £196 million into the Government’s Apprenticeship Levy Fund in its first full year, some motor retailers are still struggling to adapt to the scheme and the number of starting apprentices has fallen.

Under the scheme, any business with an annual payroll of more than £3m is required to pay 0.5% of its total wage bill – minus a £15,000 allowance – into a fund it can then draw on to fund approved training schemes.

Despite repeated calls from the motor retail industry for the scheme to be delayed, the Government introduced the levy in April 2017 in an attempt to meet a commitment to three million apprenticeships starting in England between 2015 and 2020.

Every one of the AM100 qualifies to pay the Levy by virtue of payrolls of above £3 million and a combined spend on staff of about £3.9 billion.

Nor do the difficulties seem to be restricted to motor retail, with Department for Education figures showing a 26.5% fall in the number of new apprentices. In the first quarter of the 2016/17 academic year, the DfE figures showed 155,600 apprenticeship new starters. This fell to 114,000 in the same period in 2017/18, which the DfE said was “likely to be associated with the introduction of the apprenticeship levy in April 2017”.

‘A fresh approach is needed’

Neil Carberry, the managing director of the Confederation of Business Industry (CBI), said the figures were “alarming” and proved that “the Apprenticeship Levy isn’t yet working for businesses, apprentices and the economy”.

He added: “A fresh approach is needed to make skills reforms work. The CBI will continue in its calls to government to evolve the Apprenticeship Levy into a flexible skills levy, so firms can fund training for their people whatever the form of high-quality course they do.

“Policy-makers must collaborate more closely with businesses and learning providers to design a stable national framework for skills.”

The Institute for the Motor Industry (IMI) said the slump could be attributed to “a combination of confusion amongst employers about the new processes, reluctance by smaller employers to take on what they see as an increased administrative burden and simple inertia in the transition from the old apprentice frameworks to the new standards”.

Nash said: “Perhaps this reflects the fact that apprenticeships are a long-established entry into automotive, with many excellent employers offering first-class schemes.”

However, even a 15% decline will be unwelcome at a time when the automotive sector is already trying to address a skills shortage.

“Getting the education framework right is essential to attract a younger generation and guarantee the UK automotive economy thrives.”

Stoneacre Motor Group runs its own training academy and is classed as an apprenticeships “employer provider”, recruiting and training between 100 and 150 apprentices a year.

Shaun Foweather, the group’s managing director, said the academy had allowed Stoneacre to bring “a high proportion” of its levy payments back into the business to fund apprentice training, but the scale of its wage bill and its investment in training that goes beyond the approved frameworks make it impossible to reclaim the full amount it has paid in.

However, he was adamant that the levy had not affected Stoneacre’s commitment to apprentices: “The return on investment for us as a business is extremely good.”

But Foweather did acknowledge that smaller dealer groups may struggle to gain such benefit from the scheme.

“There is very little support out there for employers. Stoneacre’s group academy manager, Claire Rooms, makes sure that any external training that is provided for us is costed appropriately for the provision that we get, but few groups are so well equipped.

“The team behind the Stoneacre Academy keep me up to date on the status of our Apprenticeship Levy funding pot and we have the staff to ensure that we can reclaim back what we can.

“For smaller businesses, I can appreciate that will place quite an admin burden on them.”

While Stoneacre will not be able to draw down all its funds, other groups are having the opposite problem.

Sarah Johanson, group HR adviser at Jennings Group, said the levy had profoundly affected the number of apprentices the business can employ and said the cost of training had increased dramatically under the new scheme.

She said: “We have had a decrease in the number of apprentices since the introduction of the levy, the biggest reason being the cost of our technical apprenticeships.

“Prior to the levy, as a group we were introducing more apprenticeships across the non-traditional roles, into accounts, administration, customer service, etc. However, due to the substantial increase we have incurred in training apprentices in the motor vehicle technician roles and bodyshop roles, which are essential to our business, we have had to reduce numbers elsewhere.”

Johanson said Jennings Group’s levy fund will be fully drawn down on technical roles alone, which leaves no additional funding to expand into other areas.

“The Government’s argument is that once the pot is exceeded you then become co-funded and the training is available at a far reduced rate,” she said.

“However, they are not appreciating that the cost to the business has already dramatically increased and then we still have the wage costs on top of that, which does not encourage businesses in the current climate to create more apprenticeship posts.”

Pendragon reported that its recruitment of new customer service apprentices had been hampered by delays in the introduction of new skills frameworks, which qualify for funding for training from the Apprenticeship Levy pot.

A spokeswoman for the group, which employs more than 9,700 staff, said the result had been that certain training providers were charging commercial fees on top of the apprentice funding bands to supplement the cost of training not covered in the framework cost.

She added: “Training providers have been slow to develop the programmes against the new standards, which has in turn made it difficult to utilise the levy in the initial few months.

“In addition to the slow pace, many providers we have spoken to have not developed the material to reflect the development needs of a fast-paced, digital environment and still depend on ‘old school’ theoretical-based training.

“There needs to be a significant shift in the quality of the training available under the apprenticeship scheme.”

Pendragon said it has now has a plan in place to ensure it maximises “the potential of the levy” in line with its business strategy and skill requirements throughout 2018.

Bromsgrove-based Arbury Group appears to have another apprenticeship headache.

Its smaller scale – eight sites across the West Midlands, Worcestershire, Warwickshire and Staffordshire – meant it recruited apprentices directly with its manufacturer partners, using the approved training programme relevant to each brand.

Managing director Paul Goodwin, who started as an apprentice himself, said: “Our advice has been that we cannot recover the levy as they are not an approved supplier.”

He described the levy as “a cost burden”, adding that while it was well intentioned, recovering the group’s payments had proved “challenging with the route we have chosen”.