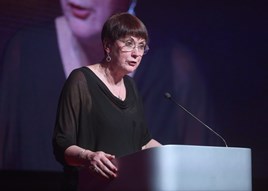 Dame Judith Hackitt has called the Apprenticeship Levy a ‘lose-lose’ and urged the Government to rethink its strategy, ahead of National Apprenticeship Week.

Dame Judith, chair of not-for-profit Semta made the call to action during her speech at the Semta Skills Awards in London on March 1.

“We are not asking for the levy to be scrapped but it does need a rethink if it is to achieve what we all want and what the UK needs for the future.

“We have seen the number of new starts collapse with many companies postponing or halting apprenticeships. What should have been a win-win has become a lose-lose.”

She cited the cost of training as a deterrent to providers offering courses and called for “greater flexibility” amongst employers.

“To train the talented individuals we are going to see here tonight costs more that £27,000,” said Hackett.

“Providers are reluctant to offer courses, which cost more than the cap, so there is a need to recognise the true cost of different types of apprenticeship not have one simple cap.

“There needs to be greater flexibility for employers and providers to agree payment schedules especially in sectors like ours where upfront costs are high.

“The rules on transfer of unused levy need to be relaxed – moving the current cap at 10% to 50% would stimulate Levy funds being used across supply chains.

“The levy should be used for what is says on the tin- Apprenticeships, without dilution to fund other training schemes.

In her closing statements, Hackett asked for the industry to work together to make the change easy to implement.

“The process of approval of apprenticeship standards must be streamlined,” she said.

“We know that the IFA has taken time to set up, but if we are to achieve the momentum we need on apprenticeships we cannot have the delays and deferrals, which we have been seeing.

“We all need to work together to make this as easy to implement as possible, not create unnecessary obstacles when we all want the same thing – more and more young people taking up apprenticeships.

“These conversations need to continue elsewhere – and urgently.”

Winners of the Semta Skills Awards were:

Apprentice of the year, sponsored by MBDA UK

Higher Apprentice of the Year sponsored by The Education & Training Foundation

Skills Champion of the Year sponsored by BAE Systems

Skills Innovation of the Year sponsored by Siemens

Training Partner of the Year sponsored by Rolls-Royce

Runners up: Coleg Cambria and Babcock International Group in partnership with Royal Electrical and Mechanical Engineers

Technician of the Year sponsored by EAL

Diversity in Engineering sponsored by Confederation of Shipbuilding and Engineering Unions

Runners up: Babcock International Group and Transport for London

AM Poll
Are video appointments a better use of sales executives' time than face to face appointments? Please leave a comment.
Vote
View all
2339