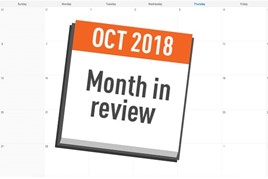 Volkswagen announced in Ocotber that it would restructure its dealer model from 2020, with new sales and service formats joining its dealer network across Europe.

The SMMT's report of September registrations showed that Volkswagen Group brands accounted for 49% of the UK’s total registrations decline of 20.5% (87,336 vehicles) as the brand’s WLTP-related supply woes were felt by car retailers. A total of 42,830 fewer vehicles were registered by Audi, Bentley, Porsche, Seat, Skoda, and Volkswagen in the month than during in the same period in 2017.

The bad news continued for VW Group in October when German authorities fined Audi €800 million (£704m) for violating diesel engine emission regulations on certain V6 and V8 diesel engines and cars. Audi suffered a near-70% decline in registrations in its home market of Germany in September.

While all of these stories were important, worthwhile and well read, they paled into insignificance next to October's most-read story across all AM channels: Escaped cow causes chaos inside Arnold Clark Mazda showroom. The escaped animal caused £1,500 worth of damage to the Stirling site before being safely returned to its field.