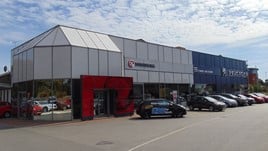 A collaboration of two Evans Halshaw branches has led to the first combined Peugeot and Vauxhall dealership in the UK, The Wakefield Express has reported.

The newspaper reported that the Evans Halshaw Peugeot dealership, which was previously on the Cathedral Retail Park on Charlesworth Way, had been moved to a facility on Doncaster Road as the two brands were brought together for the first time.

Pendragon’s national franchise director for the Vauxhall brand, Jeff Hocking, was quoted in the publication, stating that the merger had marked “an exciting transition for the brand”, adding that the newly-refurbished dealership offered a variety of new facilities and also incorporates Peugeot’s brand-new corporate branding, giving it a fresh new look.

He said: “We are looking forward to welcoming customers to our brand new, multi-brand showroom.”

In March 2018, AM exclusively revealed Vauxhall’s plans to cull more than 100 of its 324 UK retail locations within the next 12 months in a bid to return the brand to profitability under new owner, the PSA Group.

Norman’s main task since has been the implementation of the PACE! recovery plan – devised by Michael Lohscheller, the chief executive of Opel Automobile, and his board – in the UK.

In April Vauxhall terminated all of its 326 franchise contracts in the UK as part of a complete refranchising programme, which will include new standards, new bonus structures and an increased focus on digital retailing.

PACE! also targets a return to profitability for the brands, which have failed to make a profit this century, aiming for a 2% operating margin by 2020 and 6% by 2026.