Industry big guns out in force for Automotive Management Live 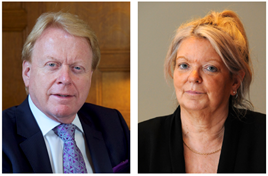 The National Franchised Dealers Association (NFDA) returns as  event co-host, on hand to inform dealers about its activities concerning the regulatory environment and electric vehicle uptake, while the Institute of the Motor Industry (IMI) will be running the People Theatre, ensuring skills and workforce development remains on the agenda.

The IMI wants dealers to ensure they meet their legal obligations when employees work with electric vehicles (EVs) and address the growing calibration issue created by the growth of advanced driver assistance systems (ADAS).

Steve Nash, IMI chief executive, will set out the legal framework of working with EVs, hybrids and plug-ins under the Electricity at Work Regulations and announce details of a new ADAS code of conduct when he takes to the stage at the IMI People Theatre.

The electrified vehicles’ and ADAS standards form part of the IMI’s new TechSafe campaign to provide the industry with appropriate skills for new technology which will also include connected and autonomous vehicles.

The IMI has created its electrified vehicle qualification and wants to see a publicly accessible professional licensing scheme or register in place.

Nash highlights varying standards across the industry and the issue of dealers who are unaware of the rules: “In the main, the franchised dealers are in the right place, but they still need to be aware of the regulations and understand what the implications are and what good looks like from the point of view of the enforcers, the Health and Safety Executive. Brands like Toyota and BMW have invested a lot of money in training their network, but not every network has.”

However, there is no legislative framework for ADAS even though by 2020 it is estimated that 40% of new vehicles will have at least two ADAS features fuelling the demand for calibration services post repairs, hence the need for a code of practice to set out minimum requirements.

Nash added: “It’s definitely a big issue in the accident repair sector and it’s a challenge for the multi-brand repairers. But the franchised sector also needs the right processes in place to show the car was signed off by a certifiable expert when it leaves the workshop.”

The NFDA, the driver behind industry initiatives such as the Drive My Career recruitment platform and the Electric Vehicle Accredited scheme, is also continuing its work to influence the Financial Conduct Authority’s looming changes to motor finance rules. Separately, AML will also host a dedicated motor finance session.

NFDA director Sue Robinson said: “It has been a busy first half of the year. New car sales have been affected by the continued political uncertainty. The confusion surr-ounding emissions has also had a detrimental affect on the market.

“Aftersales and used cars continue to remain key areas of focus for franchised retailers. NFDA has been calling on the Government to secure a Brexit deal and provide clarity to businesses and consumers as soon as possible.”

The Real Driving Emissions (RDE) regulation is due to be implemented on September 1, 2019.

Robinson said that following NFDA lobbying, the Department for Transport (DfT) granted a derogation for non-RDE compliant vehicles on run-out manufactured at least three months before the implementation deadline which will be valid for 12 months after the regulation comes into force.

The NFDA has become a founder member of the Alliance of European Car Dealers and Repairers (AECDR) which launched this summer and has already formulated a collective response to the consultation by the European Commission aimed at evaluating Block Exemption Regulation.

Drive My Career, the NFDA’s employment initiative aimed at promoting the sector as a career choice for young people, now has more than 1,100 dealerships on the dealer-finder interactive map, according to the NFDA, and directs thousands of jobseekers to its members’ career pages every month.