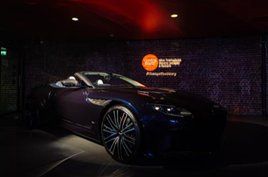 Aston Martin has partnered with Centrepoint to raise £1million to provide accommodation and help to homeless young people between the ages of 16 – 25.

Centrepoint is a UK youth homelessness charity and the two companies were at The Roundhouse in Camden to celebrate the 50th anniversary of the cause.

Both the Duke of Cambridge and Palmer spoke with young people from Centrepoint who have completed work placements at Aston Martin, and those who are due to start apprenticeships in 2020.

Palmer backs apprenticeship schemes, having started his own career as one.

Palmer said: “Apprenticeships are a great opportunity for people to develop their skills in a broad range of areas and it is a delight to have partnered and supported Centrepoint in furthering this cause. In 2018.

“I personally believe in broadening access to apprenticeships and that is why my wife Hitomi and myself founded the Palmer Foundation in 2018.

“This privately-funded programme will create industrial apprenticeship opportunities for disadvantaged young people in the UK.

“As such it has been such a pleasure to work alongside Centrepoint in furthering this cause.”