Dealership worker sped through village at 84mph in employer’s car 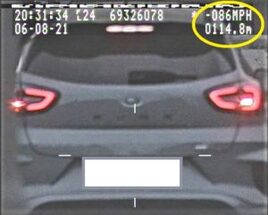 A car dealership employee has been banned from driving after being caught speeding through a Yorkshire village at 86mph in a new Ford Puma owned by his employer.

Reece Dunn, from Skelton, near York, was caught by a police camera van parked in a 40mph speed limit zone just yards away from his home in the village, Harrogate Magistrates Court heard this week.

He appeared at court this week, where he pleaded guilty to the speeding offence.

Traffic Constable Forth said: “I welcome the disqualification issued by the courts - travelling at that speed is totally irresponsible.

"It’s all the more surprising that Dunn chose to do this in a vehicle which belonged to his employer and was literally around the corner from his family home.

“I hope that the penalty issued deterred others from travelling at speeds in excess of the speed limit in North Yorkshire.”