Kia Motors has secured an agreement to be the Official Partner to UEFA Europa League for the next three seasons, running through to the final in 2021.

Kia’s three-year sponsorship agreement sees the introduction of a series of new programs and initiatives to bring fans closer to the tournament than ever before.

As an Official Partner, Kia Motors will help UEFA (Union of European Football Associations) to strengthen its engagement with fans across Europe and around the world.

Kia’s role as Official Partner gives the company new opportunities to increase awareness of the Kia brand, while engaging with a huge audience of global football fans. Kia will supply a fleet of 90 vehicles for the 2019, 2020 and 2021 Finals.

The fleet will be used to transport referees, officials, delegates and VIPs, and will support the operation of the tournament final. The 2018-19 UEFA Europa League final will be played at the Olympic Stadium in Baku, Azerbaijan on 29 May 2019.

The program provides the opportunity for young football fans from all over Europe, between the ages of eight and 12 years, to participate in the pre-match ceremony for each of the 205 matches.

In addition, Kia will operate on- and off-line ticket promotions for local football fans in each country.

The carmaker will collaborate with UEFA in carrying out the first UEFA Europa League ‘Trophy Tour’, giving club supporters from across Europe the chance to see the iconic Trophy for themselves, and meet some of the legendary players of the game at the same time. 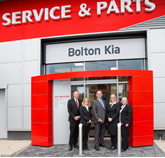