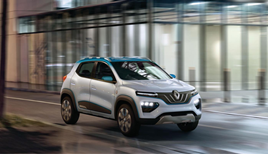 Renault has announced plans to launch hybrid and plug-in hybrid versions of its Clio, Megane and Captur models in 2020 and an affordable all-electric K-ZE EV next year.

The French car manufacturer will deliver the K-ZE – which it described as an A-segment, SUV-inspired electric vehicle, capable of a 155 miles (NEDC) range initially into the Chinese market, ahead of its roll-out into other global markets.

In a statement made ahead of the Paris Motor Show, which opened its doors to the global press today (October 2) Groupe Renault chairman and chief executive, Carlos Ghosn, clearly spelled out the need for EVs in the Renault range, stating that changing government policies over diesel have “condemned” diesel.

Quoted in the Financial Times, Ghosn said that consumers buy cars based on price, running cost and resale value and “do not care” what engine their vehicles have.

He added: “Diesel is condemned because policymakers have condemned diesel. That is it.”

Renault will target China first with its new EV-led approach to its product range.

Ghosn said that China was the largest and fastest-growing market for electric vehicles and Renault K-ZE will therefore be offered there first and will be manufactured locally by e-GT New Energy Automotive Co, a Joint Venture with Dongfeng Motor Group and Nissan.

Ghosn said: “Groupe Renault was a pioneer and is the European leader in electric vehicles. We are introducing K-ZE, an affordable, urban, SUV-inspired electric model combining the best of Groupe Renault: our leadership in EV, our expertise in affordable vehicles and in forging strong partnerships.”

Renault has also confirmed its plans to further electrify its range in its 2020 product refresh cycle, offering hybrid on Clio and plug-in hybrid on Mégane and Captur.

The brand said that it would use e-Tech, described as “an innovative, 100% Renault in-house technology which enables Renault to offer hybrid versions on B and C segment models” to implement the switch to an electrified drivetrain.

Ghosn also discussed how on-board experiences evolve with the advent of new mobility in the brand’s press conference.

Renault’s investment stake in French media group Challenges will drive the delivery of a new vision for the future of mobile content, Renault said, in the form of an Augmented Editorial Experience (AEX).

“With the advent of connected, autonomous vehicles, customers will expect more of their traveling time. Experimenting with Groupe Challenges, we imagine what tomorrow’s connected, personalized mobility experience could be”, Ghosn said. “Access to premium content delivered through unique on-board experiences for drivers and passengers will become key differentiators.”

Five differences in how to sell EVs and hybrids

Five differences in how to sell EVs and hybrids

Revised BMW i3 gets new battery with increased range

Revised BMW i3 gets new battery with increased range