Mitsubishi Motor UK's Truck King Battle is about to come to a head among franchisees as the finalists in the L200 pick-up design competition prepare to be unveiled via social media.

As part of a community-building and awareness campaign borrowed from his time as the vice-president and managing director of Harley Davidson in Europe, The Middle East and Africa, the brand's managing director, Rob Lindley, has challenged retailers to come up with an array of customised L200 designs.

The top five designs, which AM was told were “extremely varied” will be unveiled via Twitter next week, with the winner being the design which attracts the most online engagement.

A winning entry will be revealed at the brand’s annual dealer conference on March 21, in time for the truck to be built in time to make an appearance at the CV Show at the Birmingham NEC. 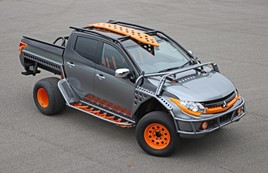 “Submissions have come in from retailers across the UK,” said Lindley, who is “borrowing” the idea from Harley Davidson’s Battle of the Kings.

Lindley made a presentation at the Sophus3 annual Summit in London last week and spoke to the assembled automotive retail and digital marketing specialists about what the car sector could learn from the world of motor-cycles.

Speaking to AM at this week’s Geneva Motor Show, he said: “One thing that Harley do very well is create a real noise and sense of community around the brand and I’m keen for us and our retail network to work on that aspect of what we do.

“I thought that the Truck King Battle would be a bit of fun and it’s been great to see our retailers get involved and really stretch their imaginations.

“When the build’s been completed the winning retailer will be able to use the finished article for promotional purposes and we intend to do the same.”

In-line with Lindley’s plan to grow awareness of the Mitsubishi brand and engagement is a desire to see retailers personalise their showrooms in a similar fashion to the US motorcycle brand, which encourages the sale of accessories bespoke to each site.

With a new CI on the way, Lindley said that negotiations had been underway to leverage a little flexibility from the Japanese brand to deliver the vision.

“Obviously when you’re creating a new CI consistency has to be at the core of it,” said Lindley, who believes the new-look showrooms will begin to be rolled-out in Q2, with 10 sites adopting the new look by the end of the year.

“I’m keen to ensure that we don’t adopt a cookie-cutter approach though, and really want to see dealers adopt a little local character.

“As such, we’ve been working with Mitsubishi to establish a local ‘brand book’, which will set out a baseline for what will be expected of the new CI and exactly how much scope to be creative our retailers will have.”

Lindley said that, since AM visited the brand’s Cirencester headquarters last September, the have been several changes within the network, with several new franchised sites also set to be added.

Bachelors Motor Group added a second site in York and Arnold Clark bought Paisley-based Phoenix Motor Company in the second-half of 2018 and a new dealership is set to open in Bath, with another site also planned for Yorkshire, Lindley said.

The brand delivered a 6.1 out-of-ten score in the NFDA’s latest Dealer Attitude Survey this week, slipping a place in the rankings and Lindley said that he would be working with his dealer council to make improvements.

He said: “With a 97% response rate, the survey is something I encourage and something that I use as a real barometer of how happy the network is. I’ve said that I want us to be consistently ranked in the top-quartile and that means it’s something that we have to act on.”

Mitsubishi’s UK retail network generated an average 1.2% return-on-sale in 2018 and Lindley is targeting 2%.

He said that, despite overhead absorption of 90% across the network, a growing car parc meant that Mitsubishi retailers had to be working hard to maximise their aftersales profits in the coming years.

“It’s already a very strong aspect of the network’s operations,” he said. “But the truth is that the growth in the car parc means that there’s opportunity and our retailers can’t afford to stand still. In the next 18 months to two years we’ll need to add an average of one technician for each site.” 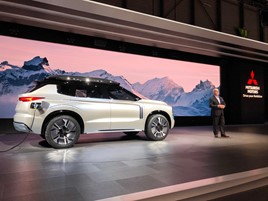 At this week’s Geneva International Motor Show Mitsubishi unveiled an innovative vehicle-to-home (v2h) electric charging platform, which could power a home or small business at times of peak energy demand.

Mitsubishi chief operating officer, Trevor Mann, said that the new technology would be sold by retailers in the near future.

However, Lindley said that it was unlikely to reach UK retail sites any time soon and had been designed to benefit the Japanese market where energy supplies were often impacted by earthquakes.

Alongside the Engelberg Tourer hybrid SUV concept, the show did host the unveiling of a facelifted ASX crossover, though.

Set to be launched in Q4 of this year, the model will usher-in the option of a new CVT gearbox and four-wheel-drive.

“Given where we position ourselves in the market, I think that it’s good to have those new options,” said Lindley.