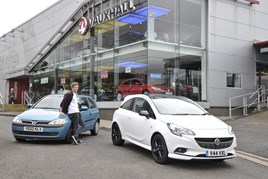 Available on selected vehicles – including the Astra, Mokka X, Crossland X, Grandland X and VIVA ROCKS – the scheme will run across the PSA Group-owned brand’s UK retail network until June 30.

A statement issued today (June 4) revealed that the brand is offering prospective customers the opportunity to ‘Trade Up’ with a minimum £4,000 guaranteed scrappage allowance.

If a vehicle does not the minimum seven years old demanded by the scheme’s terms and conditions, however, customers can still claim a minimum £3,000 extra part-exchange value in conjunction with a 6.9% APR representative finance offer.

Vauxhall’s offer is available only in conjunction with a Conditional Sale or PCP finance agreement.

Stephanie Howson, Vauxhall’s retail sales director, said: “There really isn’t anything quite like driving off the forecourt in a brand new car for the first time, and thanks to our exciting Trade Up event, motorists will be able to share in that feeling.

“People often assume they can’t afford to buy a brand new car, but that’s simply not the case. We would like to encourage anyone considering upgrading their vehicle to visit their nearest Vauxhall retailer and take advantage of this fantastic offer.”

Vauxhall is also offering 20% off genuine and Vauxhall approved accessories throughout June.

The manufacturer’s Trade-UP sales campaign will aim to bolster sales for the brand following a 2% year-on-year increase in registrations (to 37,769) during Q1.

In August 2017 the manufacturer claimed that it had rid UK roads of 20,000 higher-emitting older vehicles as part of a £2,000 scrappage scheme it initially launched back in 2015.

Vauxhall’s scheme was first launched in 2015 and returned – for a limited period – in 2016 and in May this year with the offer running “until stocks last” on all vehicles bought and registered by the end of September, according to a statement.

“While rivals are now trying to catch up with our scrappage scheme, Vauxhall has already surpassed the 20,000 vehicle milestone, with over 5,000 of those in 2017,” said Vauxhall’s then retail sales director, Leon Caruso.

“Scrappage has been a tremendous success for us and our customers. Not only can buyers potentially swap their older, often higher polluting car for a cleaner, more efficient brand new Vauxhall, but they can also use scrappage in conjunction with some of Vauxhall’s other great finance offers.”