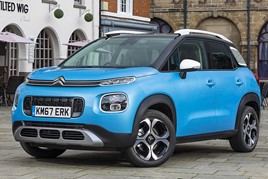 Citroën UK is offering customers the chance to save £5,000 on a new C3 Aircross Compact SUV, New C5 Aircross SUV or C4 Cactus Hatch as part of a car ‘scrappage’ scheme aiming to reduce vehicle emissions.

The Citroën Swappage Scheme promotion, which is available from the French car makers UK retail network until the end of 2019, is open to customers who have owned a car or van of any make and model for more than 90 days, which was first registered before January 1, 2013.

Its launch follows the launch of a scrappage scheme scheme by the Mayor of London, Sadiq Khan, which aims to help London’s low income and disabled motorists scrap their older, more polluting vehicles.

Eligible applicants to the Mayor’s scheme can get £2,000 to scrap a Euro 4 petrol car (older than 2005), or Euro 6 diesel car (older than September 2015), meaning that Citroën customers who live in one of 32 London Boroughs could now benefit from up to £7,000 in savings.

Citroën UK sales director, Eurig Druce, said: “We are delighted to be able to introduce our new Citroën Swappage Scheme for the remainder of 2019.

“With a range of award-winning products available, including our New C5 Aircross SUV, now is a great time to upgrade an existing older vehicle, to a newer, safer and cleaner Citroën model.”

The newly-introduced Citroën Swappage Scheme sees the brand team up with CarTakeBack.

The French brand’s official car-recycling partner has designed its Citroën recycling package so that dealerships across the UK can dispose of cars traded in through the scheme easily and efficiently.

Citroën said that if the trade in vehicle is to be scrapped, the dealer portal allows customer to have their existing car collected from one of three locations: their nearest dealership, the comfort of their own home or even from their work address.

Last month Citroen UK managing director Karl Howkins told AM that its UK dealers that their future lies in sharing sites with other car brands if they are to survive.

“For our dealers to be successful, you have to be multi-franchised,” said Howkins.

The new Swappage scheme could provide a boost in retail sales for the brand which recorded volume growth of 0.66% (to 45,031) in October's registrations data, which was published the the Society of Motor Manufactuers and Tradsers last week.