New car sales declined by 6.7% during October as consumer confidence dipped to its lowest level for six years as talk of a December General Election grew in volume as another Brexit deadline loomed.

According to data published by the Society of Motor Manufacturers and Traders (SMMT) today (November 5) 10,348 fewer cars were registered than in October 2018, reflecting a tough environment for businesses and consumers as economic and political uncertainty continued to impact confidence. 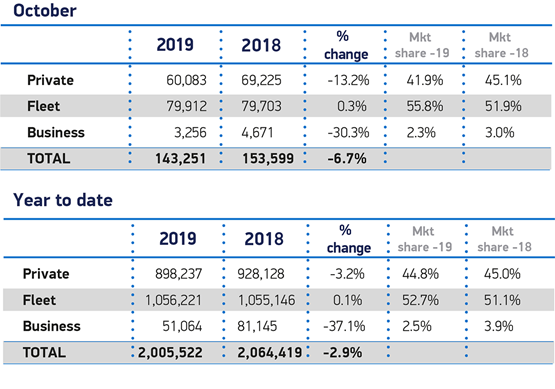 SMMT chief executive, Mike Hawes, said: “The overall market remains tough with October now the year’s eighth month of decline and in need of an injection of confidence.

“Whether the general election delivers a ‘bounce’ to the economy remains to be seen, but with attractive deals and an ever-greater choice of low, ultra-low and zero emission models arriving in the UK’s showrooms, consumers have every incentive to consider buying a new car.”

Registrations of diesel cars fell for the 31st consecutive month during October, declining by 28.3%, while petrol declined by 3.2%.

Plug-in hybrids, however, fell just short of their positive performance in the same month last year, down 1.7%.

Combined, AFV registrations reached 9.9% market share in the month – the highest on record, up from 6.9% last year. 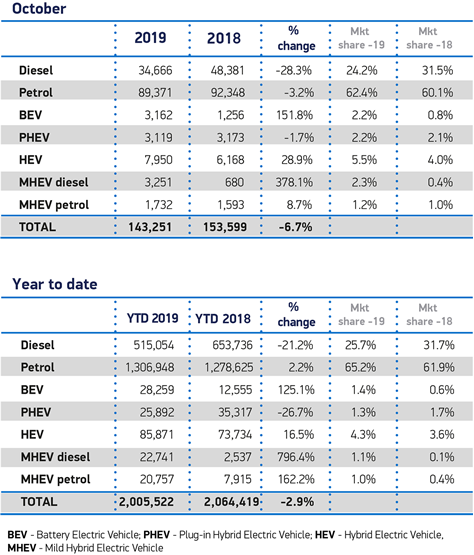 Commenting on today’s new car registrations data for October, Michael Woodward, UK automotive lead at Deloitte, said that concerns about personal finances and a fall in consumer confidence in the third quarter mean many are shying away from major purchases.

He said: “According to Deloitte’s latest Consumer Tracker data, just 4% plan on purchasing a vehicle in the next three months – the lowest level recorded in the Tracker’s nine-year history.

“That said, it is encouraging to see consumer confidence in new technologies increase, as sales of electric and hybrid vehicles reached a market share of 9.9% this month.

“We expect sales in this area to accelerate next year, as the incoming 0% company car tax rate on zero emission vehicles comes into effect.

“The long-term decline in overall sales however, and the impact it is having on the residual values of stock, also means that dealers are becoming less inclined to pre-register cars. This has been an important driver of new car sales in the past, but exposes dealers to financial risks they are no longer willing or, in some cases, able to take.

“In the face of falling sales, rising costs and increased competition from personal leasing companies, some dealers will increasingly need to think of innovative ways around financing and leasing, and online sales, to serve the changing consumer.”

Sue Robinson, director of the National Franchised Dealers Association (NFDA), said: “With the current climate of uncertainty continuing to affect businesses and consumers, the decline in new car sales shows.

“Franchised retailers are making significant investments in their online strategy as well as their dealerships to ensure a platform for future growth and offset consumer uncertainty.”

Auto Trader commercial director, Ian Plummer, said: “Consumer confidence in the economy fell to its joint-lowest point in six years last month and historically, there’s always been a clear correlation between the two given the value of the purchase.

“This is particularly true for retail consumers and it’s also where we’ve seen the biggest decline in October.

“Brexit is the driving force of this lack in confidence, with continued uncertainty around our exit from the EU.

“The upcoming General Election will continue to cause further uncertainty around consumer purchase intentions.

“There are at least benefits to it taking place in December though with it being a traditionally slow month for new car sales.

“Once we have a clearer understanding of what our exit from the EU looks like we should start to see consumer confidence improve and with it more stable new car sales.”

Seán Kemple, director of sales at Close Brothers Motor Finance, was keen to highlight the growth in AFV registrations. He said: “Once again, electric and hybrid vehicles are the big winners. Battery Electric Vehicles saw a 236% increase in September, and a 151.8% rise in October.

“We’re hearing of massive demand for alternative fuel vehicles, where manufacturers are finding it challenging to keep up and delivery times are taking longer than usual.

“It’s important, also, not to underestimate the considerable impact of fleet drivers. The announcement around Benefit in Kind going to 0% from April 2020 on pure electric vehicles is starting to have a significant impact.

“Lack of clarity had left company car drivers on their own, and consequently we saw many putting off a new purchase until the picture became clearer.

“Now that it is, drivers can see what the New Year will look like, and are moving into a different type of vehicle that will save money and reduce their company’s overall carbon footprint.”