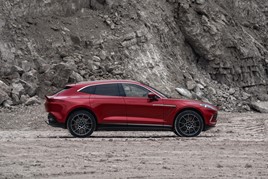 Stroll completed the purchase of 17% of the Gaydon-based British sportscar maker back in January but plans have now been outlined which should put production of the new DBX SUV back on track following the COVID-19 coronavirus lockdown.

Auto Express reported today (April 21) that part of the funding is expected to come from Stroll’s ‘Yew Tree’ consortium with the rest from a rights issue.

A further credit line of £150m is also reported to have been made available to the company, it said.

The outgoing Hughes said last month that “difficult trading performance in 2019 resulted in severe pressure on liquidity which has left the company with no alternative but to seek substantial additional equity financing”.

Their 4.8% and 3.5% stakes in the business will, however, be diluted to less than 1% by the latest rights issue.

The long-awaited unveiling of the 550PS DBX took place in Beijing, China, on November 20 with the claim that it would “propel the brand to new heights worldwide” and Lavery said that the new model would deliver on Aston Martin’s aim to sell 4,000-per-year globally.

Cambria moved into a new Aston Martin dealership in Hatfield last year and has plans to develop another new facility in Brentwood next year, with the arrival of the £158,000 model central to the plans.

Lavery said: “It will do for the brand what the Urus has done for Lamborghini.