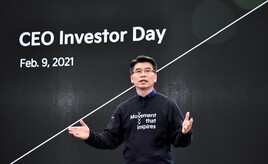 Kia president and chief executive Ho Sung Song has said that the Korean carmaker will be “reborn in 2021” with the launch of new mobility solutions and 11 new electric vehicles (EVs).

The brand, which has already redesigned its logo in a 2D style that reflects those recently adopted by Volkswagen, BMW, Toyota and Vauxhall, spelled out its future plans at a virtual investor conference held in Seoul yesterday (February 9).

Ho Sung Song (pictured), said: "Kia is being reborn in 2021 with a new logo, new design, and new corporate name.

"Kia will transform into a brand that excites and inspires customers with innovative mobility experiences.”

Under the plan, EVs, plug-in hybrid EVs (PHEVs) and mild hybrids will make up 40% of all Kia sales by 2030, with an annual sales target of 1.6 million units.

Starting with the launch of its first dedicated EV later this year, Kia will strengthen its EV line-up by 2026 with 11 new models – seven dedicated EVs built on the Electric-Global Modular Platform (E-GMP) architecture, and four based on existing ICE derivatives.

Vehicle subscription and leasing looks set to become a core offering of the Kia brand.

Last month Kia Motor UK RV and fleet operations manager, Gary Curran, was been given a new role as leasing and rental manager.

And, in revealing its new plan yesterday, Kia revealed that it would roll-out its Korean car subscription service - Kia Flex – globally as part of its plan to become a provider of personalised, customer-centric and sustainable mobility services.

The ‘Kia Flex’ vehicle subscription service, which currently only operates in Korea, offers a new car, including maintenance, repairs, insurance and car tax, for a monthly fee.

Kia said it will launch a global version later this year under the name Kia Subscription.

The service will be will be operated by Sixt Leasing, which was acquired by Hyundai Motor Group last year, and the vehicles will be provided by the company's regional affiliates and franchised car retailers.

In Spain, the company’s flagship car-sharing service Wible will also be expanded.

The car usership service ‘KiaMobility’, which was launched in September last year as a pilot project in Italy and Russia, will also launch in additional European markets.

Further product details and performance specifications for the CV will be revealed next month.