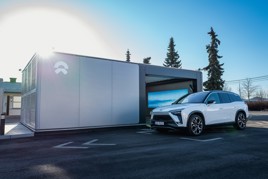 Chinese electric vehicle (EV) manufacturer NIO is stepping up its European expansion with a new factory in Hungary.

The NIO Power Europe Plant in Pest will open in September and will serve as the manufacturing, service and R&D centre for NIO’s power products in Europe.

The brand is known for its use of battery-swapping stations as an alternative to conventional charging stations and the new 10,000 square-metre plant will cover the manufacturing and after-sales service of battery swapping stations, training for power operations in Europe, and the R&D of power products.

Sales have already commenced in the Norwegian market and NIO will expand into Germany, the Netherlands, Sweden and Denmark in the second half of this year.

Former Volvo Car UK commercial director Matt Galvin announced that he had joined the firm, in June. Commenting on the changing face of the UK EV market, and NIO’s prospects within that, Galvin told AM: “Generally speaking, I think the UK is ripe for that kind of disruption.”

The brand has five current models with a further four vehicles in the pipeline. Already launched are the EP9 hypercar, the ES8 seven-seater SUV, the ES6 five-seater SUV, the EC6 coupe SUV, the ET7 saloon and the ET5 compact saloon. A people carrier is among four cars expected to be join the line-up this year.