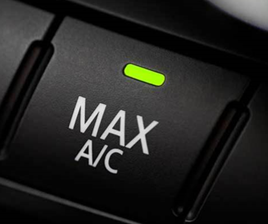 What effect does the heat have on car owners?

WhoCanFixMyCar.com, the digital source for motorists needing a local garage or mechanic, for service and repair work, here provides analysis of the impact of the recent high temperatures.

They drove an all-time ‘record week’ for WhoCanFixMyCar.com, with well over 2,600 jobs (£900,000 of work) posted in just seven days! And the requests were straightforward: requests for a simple air-con re-gas outnumbered requests for other air-con work almost 7:1

Alex Rose, WhoCanFixMyCar.com marketing director, said: “It’s also worth noting that there is a ‘memory effect’ here – even though the hottest days are behind us, air-conditioning demand continues to track ahead of the pre-heatwave level.”

Requests to fix broken electric windows (up 131% week-on-week), for tinted windows (up 175%) and radiator repair (up 200%) followed the same trend.

Finally, requests for mobile mechanics were also up 30%, perhaps indicating that drivers would rather not take their car to the garage in burning temperatures.

“Any workshops who were quiet last week can take solace from that, while perhaps also considering whether they’d benefit from a mobile arm to their business.”

Here’s the same information, taken from the start of the year. While WhoCanFixMyCar.com saw a clear spike in air-con re-gas work last week, the truth is that there is a seasonal variation in demand for air-conditioning, convertible roof and electric window work.

Heatwave aside, the demand for this ‘summer’ swathe of work leapt up in April and had been pretty steady until last week’s record temperatures.

(NB: the values are relative – all graphs are pegged to a starting point of 1. In other words, air-con servicing demand in June was 24x higher than in January). 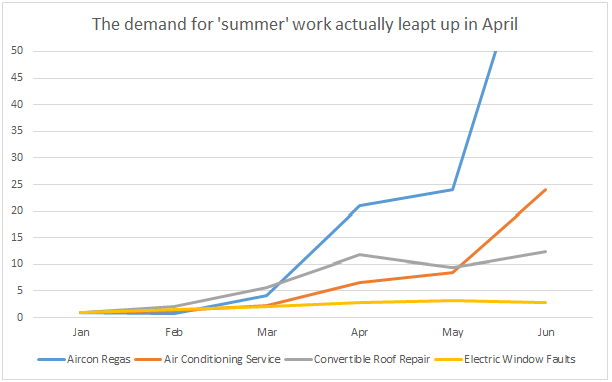 What can dealers learn from this data?

1. Be ready for ‘summer work’ from March-April

It only takes a warm March day for thoughts to turn to the summer ahead - and garages can be ready for that.

While there may not be much margin in a simple air-con re-gas, the WhoCanFixMyCar.com commissions for such a job are also suitably low, at just £5.79, and any upsell, or future work, doesn’t incur any further commission payment. So, for under £6, a garage can bring in a new customer who may go on to spend hundreds of pounds with them, said Rose.

2. Can dealers offer a helping hand to Britain’s convertible drivers?

The popularity of convertibles means there is a large number of older soft-tops in need of care.

In May - June WhoCanFixMyCar.com saw more requests for this sort of work than it did for exhaust and alternator repairs or wheel bearing issues.

“While this sort of work is a little out of the ordinary for most repairers, again, with the margins on offer, could convertible roof repair be a great addition to the services you advertise?” said Rose.