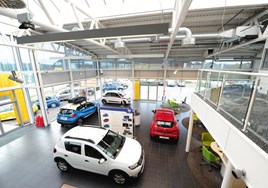 Legislation labelled as the biggest change in consumer rules to affect the motor trade for decades, is about to come into force – and experts warn the industry is underprepared.

Motor lawyer Mark Reeves says the new Consumer Rights Act is going to have a major impact on dealerships throughout the UK, which will be forced to look closely at their selling practices.

Reeves has teamed up with motor sector learning and development agency RTS Group to design and deliver courses to help dealerships get to grips with the legislation, which comes into force on October 1.

“I have been working in motor trade law for 27 years, and I know the industry is simply not ready for this,” said Reeves. “The new Act means that, when it comes to problems with the product, the ball is firmly in the consumer’s court.”

Though not specifically aimed at the motor industry, it is here the Act will have one of the biggest impacts. According to Trading Standards, Citizens Advice helped with more than 84,000 problems relating to used motors in 2013/14; most complaints were about consumer service, with drivers spending more than £363 million on these complained about cars.

The Consumer Rights Act 2015 requires that anyone buying goods (such as a car), which are found to be faulty within 30 days of delivery can demand a full refund. Known as the ‘early right to reject’, this replaces earlier rules which said a vendor could merely replace or repair a faulty item or part.

Reeves said these changes mean dealerships will have to use due diligence in all sales, paying close attention to presale vehicle checks. If they miss or overlook faults, and the customer then decides they want a refund, they could be facing forecourts full of returned motors.

“The Consumer Rights Act is the most important piece of legislation in this area for 40 years, and will prove a huge shock to the franchised dealers. I think it means that motor dealers will have to be much more focused on ensuring that vehicles are free of faults at delivery; greater emphasis on pre-delivery inspections, vehicle health checks, approved used car checks and service schedules.”

Malcolm Miller, managing director at RTS Group, said dealerships were gradually waking up to the new legislation, and his team were taking more and more calls from principals wanting training in the new rules.

“They started as a trickle but we are getting calls from dealerships every day now,” said Miller. “It is a big industry and Mark is quite correct when he says that this is a real wake-up call to traders in their selling practices.”

The legislation applies only to sales between business and consumer – B2C – and affects both new and used goods. It doesn’t affect sales between private individuals, or business to business contracts. Additionally, the new Act comes in on the back of changes in June 2014 to distance selling where, if the contract was made over the phone or internet, consumers were granted a 14-day cooling off period, during which time they have the right to return a product for any reason or no reason at all.