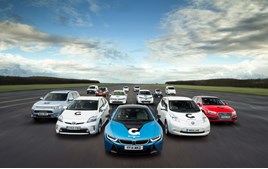 Chancellor George Osborne pledged a further £600 million to boost the ultra-low emission vehicle sales (ULEV), but there was no mention of the future of the plug-in grant.

The funds will be made available to boost registrations between now and 2021.

The Government previously announced the grant would be available until at least February 2016 for all categories of vehicle.

The automotive industry was expecting Osborne to clarify plans for the future of the plug-in car grant in yesterday’s Autumn Statement.

A Department for Transport (DfT) spokesman told AM sister title Fleet News an announcement would be made in “due course”.

Previously, ministers had announced that grant levels would be reviewed once 50,000 vehicles had been sold, a milestone expected to be reached in November.

Registrations of plug-in cars accelerated rapidly over the first six months of 2015, according to the Government-backed Go Ultra Low campaign, growing 256% against the same period last year and surpassing the 2014 full-year total with six months to spare.