The emissions scandal that embroiled Volkswagen last autumn appears to have been forgotten by consumers.

According to analysis by new car buying platform Carwow, the levels of interest in the brand from new car buyers with its current brand marketing campaign (see video below) resulting in it coming second in a new barometer models configured by consumers on its website.

The data here takes into account influences such as media spend and plate change.

Top 100 models are ‘pegged’ to an equal footing of 100 in January, and overall market demand changes are adjusted for.

The result, Carwow says, is a true, impartial, picture of how consumer demand for brands and models changed over the first three months of the year.

The results show that for Suzuki and Volkswagen investment is paying off, but for others it’s a less optimistic picture. 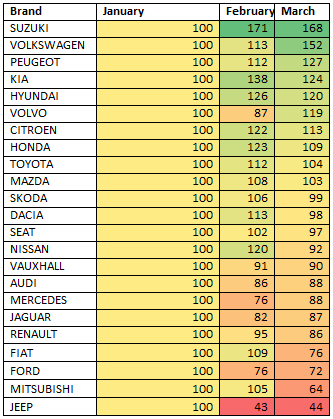 Alex Rose, Carwow head of trading, said: “Volkswagen’s troubles last autumn have already been heavily documented, but the picture this year is one of forgiveness in the consumer’s eyes.

“The marque has been running a heavyweight brand campaign over the past few weeks, emphasizing the long-term connection between Volkswagen and generations of drivers.

“This is rapidly increasing interest across the majority of the range, with Volkswagen models occupying seven of the top 10 ‘climber’ positions and two more in the top 15.”

But topping the barometer is Suzuki.

“Here, it would seem there’s no substitute for a heavyweight advertising campaign.

“The rise and rise of Suzuki is driven to a large extent by the Ant and Dec Saturday Night Takeaway sponsorship campaign.

“It's a £20 million commitment that is already starting to pay off across the range, beyond the Vitara (upon which the current campaign is focused.)

“Interest in the Swift has also been boosted by news of the new model that's coming next year, with the Vitara just outside of our top 10 climbers.

“Because Suzuki is one of the lower-ranking brands on Carwow, it’s interesting to note how quickly month-on-month interest in the brand can change.”

The Kia Sportage is in the top 10 for the quarter and the second-fastest climber in February.

This was driven by promotion of the new model nationally while some dealers still had attractively priced stock of the outgoing model, creating a ‘something for everyone’ situation for buyers.

Jeep is the fastest decliner in the Carwow demand barometer, with relative volume of cars configured in February and March less than half that of January.

“This shift is due to the fact that February and March were 'lapping' a TV campaign advertising the Jeep Renegade at the start of the year.

“In other words, the '100' in January was artificially high, and demand is now falling back towards 'normal' levels.

“Just like Suzuki, Jeep is one of the smaller brands on Carwow and, as such, big shifts in demand - both up and down - are easier to come by.

Mitsubishi's decline is driven almost entirely by the reduced subsidy on the Outlander PHEV, down from £5,000 to £2,500, Rose said.

“Because this effectively created a deadline for interested buyers, demand was 'pulled forward' into January and February before the subsidy expired on 01 March.

“Indeed, in February, Mitsubishi dealers took orders on 90 Outlander PHEV models via Carwow - more than the total number of Outlanders (PHEV or otherwise) privately registered in the same month, according to the SMMT.

“Many of the Outlanders sold via Carwow in February will, of course, have been registered on a new plate in March.”

Ford is also the largest decliner amongst our volume brands, for two consecutive months.

Based on March’s SMMT data, it also recorded a slip in market share (-4.9% in March).

“While Ford has been running its 'unlearn' brand campaign, the creative tends to focus on niche models, such as Mustang and Mondeo Vignale.”

Though this may shift brand perception in the longer term, it doesn’t appear to be driving enquiries on the core of the range - Kuga, Focus, Fiesta and S-Max are all in Carwow’s list of 10 biggest decliners in-quarter.

“While the overall volume of users configuring and buying cars on Carwow changes by month, one thing is clear: when a brand invests in a heavyweight campaign to promote a particular model range, demand for that product can be transformed in just a few weeks.”

Date source: Visitors to carwow.co.uk configured more than 1.3 million new cars in the first quarter of 2016, comparing 1,000 franchised dealers on stock availability, price, review scores and location in the process.