MPs have branded the failure to push for legal proceedings against Volkswagen Group resulting from the emission scandal as “frighteningly complacent”.

They directed their ire towards the Department for Transport (DfT) and Vehicle Certification Agency’s (VCA).

Members of the Transport Committee accused transport minister Robert Goodwill of being “more concerned with protecting the reputation of Volkswagen than punishing a business that has poisoned the people of this country”.

Goodwill was giving evidence at the hearing held at the House of Commons. He defended the actions of both the DfT and VCA.

He said: “I will not accept criticism that we have been complacent. We are the first EU member state to publish detailed testing results from our programme.

“We have ensured that this problem VW have been found guilty of is not widespread across the industry.

“We have acted quickly. Other member states have not embarked on this level of detailed testing.”

Asked by the transport committee if the VW Group had done anything illegal, Goodwill said: “A defeat device is not in the framework of the type approval legislation.

“A court would have to determine whether VW’s actions have been illegal.”

He admitted that the DfT has not had discussions or provided data to the UK’s Serious Fraud Office to aid discussions on whether a case against VW should go to court.

However, the DfT is looking at whether the VW Group could be fined for the use of the defeat device being in breach of VCA’s processes.

Ian Yarnold, head of the international vehicle standards division at the DfT, also confirmed that technical information has been submitted to the Competition and Markets Authority to look into legal proceedings.

Goodwill said: “The way to stop something like this happening again is to make sure we have a robust testing system in real-world conditions which won’t then allow the manufacturers to ‘revise for the exam’.”

The European Commission is bringing in a new real driving emissions (RDE) test for new models from September 1 next year and for all new vehicles by September 2019.

The discrepancy between lab tests and RDE results must be brought within a “conformity factor” of a maximum of 2.1, the current lab limit for new models by September 2017 (and for new vehicles by September 2019).

A margin for discrepancy is allowed on the new RDE test due to it being accepted that there will always be a difference between a lab testing environment and a car being driven on the road.

Goodwill said: “I think the fact we have found emissions up to 13 times higher when tested on the road compared to the lab tests shows that this conformity factor is still a tough target to meet.”

The DfT has published results from its £1 million six-month programme with 37 models tested in the UK by the VCA. Defeat devices were not found on any vehicles outside of the VW Group, which includes Volkswagen, Seat, Audi and Skoda vehicles. 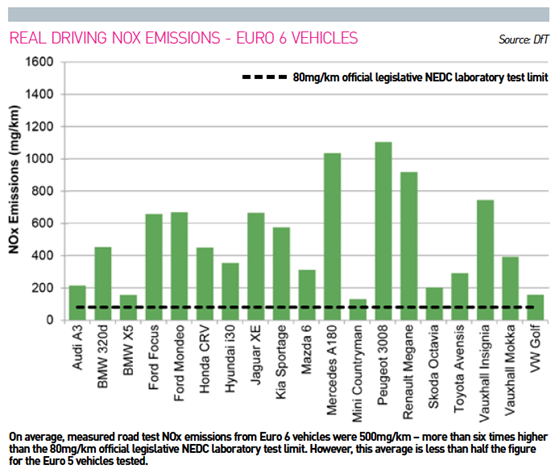 The tests used a portable emissions measurement system to compare laboratory results with those from a test track and typical road use. Emissions level results varied significantly between different makes and models, not just with VW Group models.

Goodwill said this may be due to the way manufacturers can use engine management systems within the framework of the current testing regime.

The DfT confirmed that detailed tabular information its real-world emissions investigation will be made public “in due course” with a view to publishing before the end of May.

Goodwill said: “We always knew that performance in terms of CO2 and therefore fuel consumption was not as good on the road as it was in the lab. I expected the same would be true for NOx.

“We found the difference was far greater than we imagined, up to as much as 13 times as much NOx being produced in real-world conditions.”

The DfT will continue its research with a vehicle surveillance programme which will look at vehicles and their components that are already on the market but also for new models before they go on sale.

The total cost of the research is expected to reach £2 million and the Transport Committee asked the DfT to pursue VW Group to cover the costs.

"Too close" to manufacturers

The committee also questioned the VCA’s current methods in the vehicle type approval process, suggesting that the relationship between the agency and manufacturers is “too close”. The VCA’s testing of vehicles is funded by vehicle manufacturers.

Goodwill said: “The criticism against the VCA in terms of them being too close to the vehicle industry is barking up the wrong tree. I think it’s absolutely right that we expect the industry to pay for the testing of their vehicles. You wouldn’t question that an MOT tester would pass your vehicle regardless just because you have paid them.”

Paul Higgs, VCA interim chief executive, said manufacturers were charged whether a vehicle passed the type approval process or not, and the organisation was a not-for-profit organisation.

Asked if the VCA monitored whether ex-testers leave to join manufacturers to aid them with the testing procedure, Higgs said there was no policy in place to monitor that issue but that most ex-members of staff did end up in the automotive industry because that is where their experience lies.

Emissions fix may take longer than a year

Drivers may have to wait beyond the end of this year to get cars fixed that were affected by the VW Group emissions scandal.

However, fixes to the Volkswagen Passat due to begin last month have been delayed because Volkswagen has yet to gain approval from Germany’s Federal Motor Transport Authority (KBA) for its proposed technical fix.

One UK Volkswagen dealer, who asked not to be named, said: “For a delay to the schedule to happen so early on is a concern. We have worked on a handful of Amaroks as part of a normal service booking and that has been fine, a two-minute fix, but we don’t know much about the next wave of fixes.”

However, the VW Group announced in the past fortnight that the KBA had granted approval for the software solution for affected Golf 2.0-litre TDI Blue Motion Technology cars.