Demand was down across the board, with registrations by private buyers, businesses and large fleets falling 28.4%, 21.0% and 12.3% respectively.

Year-to-date the market remains strong, up 1.1%, with record 972,092 cars registered in first four months, the highest level on record.

Mike Hawes (pictured), Society of Motor Manufacturers and Traders' chief executive, said: “With the rush to register new cars and avoid VED tax rises before the end of March, as well as fewer selling days due to the later Easter, April was always going to be much slower.

"It’s important to note that the market remains at record levels as customers still see many benefits in purchasing a new car. We therefore expect demand to stabilise over the year as the turbulence created by these tax changes decreases.” 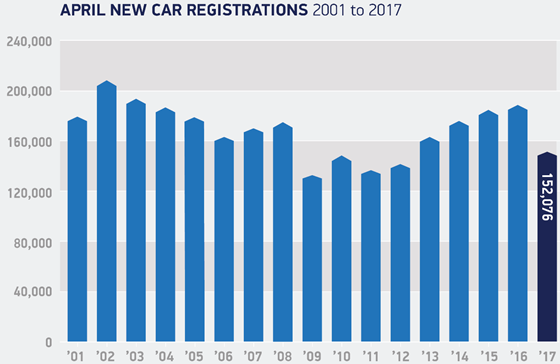 "As expected, following an all-time high result in March, April saw a -19.8% decline in new vehicle sales as a result of a number of factors, including the increase in VED on April 1, which prompted buyers to bring their purchases forward into March, and Easter falling during the month," said Sue Robinson, National Franchised Dealers' Association director.

"Intelligence from NFDA members suggests that footfall has remained stable, but there is an element of uncertainty, particularly due to the upcoming elections, which is encouraging customers to delay their purchases."

“Alternatively fuelled vehicles saw a slight decline of -1.3% following 47 consecutive months of growth. It is important that the Government continues to support motorists who are willing to switch to greener cars.

“April is traditionally one of the quieter months for new car retail. Positively, year to date the market remains up by 1.1% and with record low interest rates and record high employment levels consumer demand is expected to remain stable going forward.”

Chris Bosworth, director of strategy at Close Brothers Motor Finance, said: "We expect the turbulent political landscape, rising inflation and its’ impact on consumer spending will also hinder new car growth in the months ahead.

"Figures from our 'Britain under the Bonnet' report highlights this, with 5.5 million British motorists saying Brexit has directly impacted their car purchasing plans and has made them more likely to purchase a used car or to hold off their purchase altogether – all of which can have a knock-on effect on the industry and the wider economy.

"As such, we expect that consumers will flock to the 1-3 year ‘nearly new stock’ market, given the quality and value of cars available in this market.”

Graham Hill, car finance expert at the National Association of Commercial Finance Brokers (NACFB), said: “A decline in new car registrations in April was expected after the chancellor’s surprise move away from encouraging low emission cars, but it wasn’t meant to be this sharp.

“While private buyers are without doubt sensitive to things like changes in Vehicle Excise Duty, this in itself doesn't explain the massive fall in new car registrations.

“I suspect a growing tide of adverse press around Personal Contract Purchase (PCP), culminating in the announcement that the FCA is to investigate potential mis-selling of vehicle finance, may also have been a contributing factor.

“While much of the adverse press is mis-placed, and PCPs remain a viable option for many car owners, the resulting uncertainty has doubtless influenced the nosedive in new car registrations."

Julian Rance, Paragon Car Finance director, said: “While there has been a drop in the latest year on year sales figures, it should be remembered that much of this can be accounted for by car sales being inflated in March by consumers looking to beat the Vehicle Excise Duty deadline.

"Furthermore, April was a short month, and, with the Easter holidays, only had 18 working days.

"That said, we have been saying for some time that the market was due a correction. There are only so many cars you can sell on an island nation, and growth cannot be sustained indefinitely. In coming months we are likely to see higher growth coming from mainland Europe, and manufacturers are more likely to concentrate promotional efforts in these growing markets.

“Political uncertainties are also likely to weigh on the market in May and June with Brexit negotiations beginning in earnest and a snap general election around the corner. This could go either way however and the market will be watching developments closely, if reports of an impending government scrappage scheme for older diesel models are true, this could be a boon for new car sales in 2017, as similar schemes have been in the past."

Simon Benson, director of motoring services at used car website AA Cars, said: “With consumers turning away from the new vehicle market across the country, the knock-on effect of this slowdown could prove to be an enormous opportunity for used car dealers.

"The cost of living is rising, while consumer confidence and spending are starting to contract. That bodes well for the second-hand car market."

“April’s figures likely mark the beginning of a cooling in the market through the rest of 2017 broadly in line with the 5-10% reduction in the market that we have been anticipating.”

Richard Jones, Black Horse managing director, one of the UK’s leading motor finance providers, said: “As expected, we are starting to see a cooling of the market following the highs of recent months, not least after the record figures in March which were artificially inflated due to the changes in vehicle excise duty that followed.

"Demand for new cars was clearly pulled forward to new plate month in anticipation of these tax changes.

"The rest of the year is more uncertain - we still expect a small reduction in market size overall in 2017 with significant differences at manufacturer brand level.

"We also expect to see the diesel / petrol sales mix to continue to change - customers may be confused by news stories related to diesel and so the Government, media and trade bodies need to work together to put customers in a better informed position.” 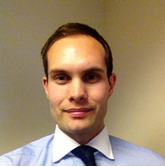